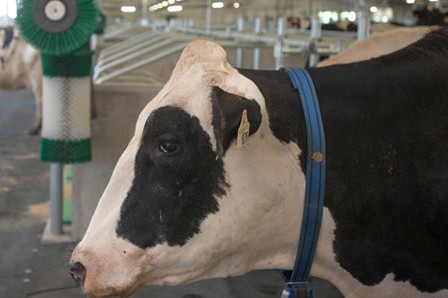 Standing off to the side, carefully observing the animals sniff around (cows have a keen sense of smell) and listening to them vocalize concern about their new environment (cows don't like change), was Bernard Laarveld, professor of animal and poultry science. Seeing the herd arrive was, he said later, a moment of pure joy.

It was also a relief because this is a project that has been a long time coming. It was 10 years ago when Laarveld, as then head of the Department of Animal and Poultry Science, received a delegation of Saskatchewan dairy producers and listened to their proposal for a new dairy facility at the U of S, a research barn that would reflect state-of-the-art industry standards.

The producers even agreed to support the idea finan­cially. Each dairy producer in Saskatchewan contributed the equivalent of $25,000 in milk quota – a total of about $4 million – to the operation of the $11.5-million teaching and research barn.

"Many times I was afraid it looked like the facility wasn't going to happen," said Laarveld, looking back over 10 years, "but we were just stubborn. There's also a bit of luck in the sense that you always have to be in a constant state of planning because if an opportunity comes along, you have to be ready. In the end, we had the right model that was closely linked to public education."

That model drew broad support, from the university and from the Agriculture Council of Saskatchewan which funded the concept development and a needs assessment. That assessment was "the foundation of a clear understanding of what it was we wanted and why it is important for producers in this province, and in Canada," said Laarveld.

Other producer groups came on board. Contributions from the canola and flax sectors "solidified the vision that the (dairy) unit is here to serve all of agriculture," he said. "We view the crop sector as a client because of the importance of feed research."

Service sector members like banks followed, as did machinery deals and private donations. Funding for the project was completed with contributions from the university, the College of Agriculture and Bioresources as well as the federal and provin­cial governments.

The result is a facility thatfeatures cattle housing much superior to the university's old dairy barn. When all the barn's systems are in use (the cows are being gradually introduced to the technology to ease the stress), computerized feeders will provide real-time moni­toring of on-demand feeding, and milk production data will be collected automatically rather than manually from both the conventional milking parlour and a milk robot system that will soon be operational.

Laarveld said the data collection systems open many new research opportunities in a number of areas – nutrition, health, reproduction, fertility, genetics. "And we have enough room to do more research. A new facility like this really gets the creative juices flowing."

Even the little extras in the barn like the self-activated grooming brushes are of interest to those studying how animals cope with stress, he said. He added some of the younger cows have already learned that if they use the brushes and then lay down right beneath them, no other cows can get a turn. "As Marlene (Fehr) says, cows can be just like a bunch of kids," said Laarveld with a laugh.

Not only is the facility a boon for research but it will mean enhanced experiential learning for U of S students in a number of disciplines.

"What we had in the old barn was 1960s technology. In this new facility, we'll be training our students with today's equipment for today's jobs."

A key feature of the Rayner facility is its attention to public education, said Laarveld. The soon-to-be-completed Feeding the World visitor gallery will highlight the role of Saskatch­ewan agriculture in global food production. It will also explain dairy production, and an overhead walkway will give visitors a bird's eye view of the facility, milking parlour and milk robot.

Like any new building, the Rayner facility had a few bugs that had to be worked out but overall, the transition for the herd went smoothly. Laarveld said he visited the barn just two days after the animals were moved in and he found the majority of them lying down in the stalls and ruminating, and that is "a good sign." He gave a lot of credit to the dairy unit staff who, while learning new routines and technology them­selves, "are so good at handling our animals. They certainly have a stabilizing effect."

With plans in the works for an official opening in October, Laarveld has turned his attention to the next phases of the Rayner facility, including networking the dairy operation into research and teaching programs locally, nationally and internationally.

Then there are the possibilities that come with green technologies like solar heating systems and rainwater recovery. But Laarveld's primary interest is the bio-energy potential of manure and waste. He understands most people view manure as an unpleasant byproduct of animal operations "but I look at things as opportunities, not as problems."