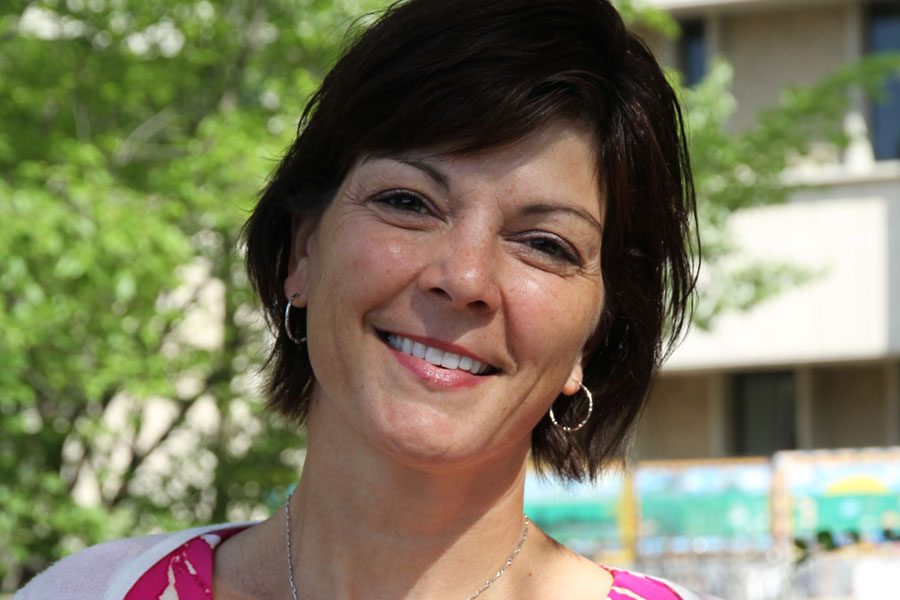 The new dean was nominated for the position, and as Prytula noted, "people can't put something in front of me and expect me not to respond." So respond she did, recalling how humbling it was "to stand before my peers and tell them why I thought I was suitable."

On July 1, Prytula officially became dean and, on the same day, received tenure and the position of associate professor of education, a remarkable trajectory considering her academic career began just five years ago. The dean was clear that she applied for and earned tenure in a separate process and did not negotiate it as part of the deanship, but she knows battling preconceived notions of what a dean looks like is yet another challenge.

"I know there's a perception that only long-term academics belong in dean positions and I realize there's a test here for me, but what I lack in knowledge I will put in the time to learn or make up for with determination and desire for improvement."

Desire, determination and learning are staples for Prytula who grew up in a Frenchspeaking family in Vonda, Sask. When she expressed an interest in education, her father, a teacher, advised against it, she said. "He was one of those teachers who always felt there was never enough time to meet the needs of all the kids in the class. He always wanted to do more."

Prytula heeded his advice and completed a commerce degree but could not deny her passion. After earning an education degree, she taught middle years with Greater Saskatoon Catholic School Division for about eight years before doing a master's in educational administration. Prytula moved on to in-school administration and was a vice-principal for almost seven years before it was suggested she tackle a doctorate, another challenge to be met head on.

"At first I thought that's crazy but then I thought, I've got an invitation to do a PhD so why wouldn't I?"

Back to university she went, and wrote her dissertation while working as a school principal and raising her own young family. "Then, as soon as I defended my thesis, I was invited to apply for a position in the college.

"It was a tough decision to move to the university," she said, having spent 15 years teaching, nurturing learning communities in schools, building partnerships and encouraging teachers to be leaders "but I like the challenge of always doing something that's harder than what you've done before."

Prytula joined the college in 2009 as an assistant professor with a goal of achieving tenure in five years. "I really started to love what I was doing, research around teachers and developing partnerships I didn't have time to build as a principal." In addition to teaching, she worked with the Saskatchewan Educational Leadership Unit and provided professional development to school divisions and First Nations.

"I realized if I, and the college, listened well, I could really tailor what I knew and offer it as help. It made me realize I have more of a responsibility now. The university has responsibility, through research and teaching, to listen to Saskatchewan and help it be stronger and better. I felt I had a role I could play there."

In May 2013, Prytula was encouraged by colleagues to apply for the position of associate dean for undergraduate programs, partnerships and research. "I dismissed it entirely, being only in my third year, but I was asked too often to not take it seriously."

In the year she spent in the job, Prytula said she developed a clearer understanding of the expectations placed on the college by the province.

"The ministry (of education) has given the university the task of educating teachers. We're here because normal schools aren't any more. I take that responsibility seriously because it influences how we think about teacher education. We're not here to imagine some utopian university idea of what teaching ought to be that's isolated from reality. Yes, we want to use what we know to improve teaching … (and) we will always improve but we must never, never lose sight of who it is we're serving. And understanding the context and complexities of the province is paramount."

Prytula admits she has been criticized for having her feet too firmly planted on the ground for an institution of high-level academic thinking "but it's a balance. Without balance, we stop being useful and stop serving our primary mandate which is ensuring the highest- quality teachers possible for Saskatchewan as it is right now, and for what we want it to become. I'm a bit preachy about that but it's important."

Maintaining that balance between the ideals of the college's education program introduced last year and the realities of today's classroom is a high priority for the new dean.

"By knowing what it is we're supposed to be doing, by listening to our partners, by listening to the mandate of education, I think we have an opportunity, and it's a rare one, to produce the best teachers. I have been able to influence changes to the (education) program that really ground it" and she plans to continue while at the same time acknowledging it has to be a collective effort.

"I can't set a priority for everyone … but my purpose here is listening, taking the expertise we have through research, understanding the context of Saskatchewan – provincial and First Nations – and using all of that to make us stronger."