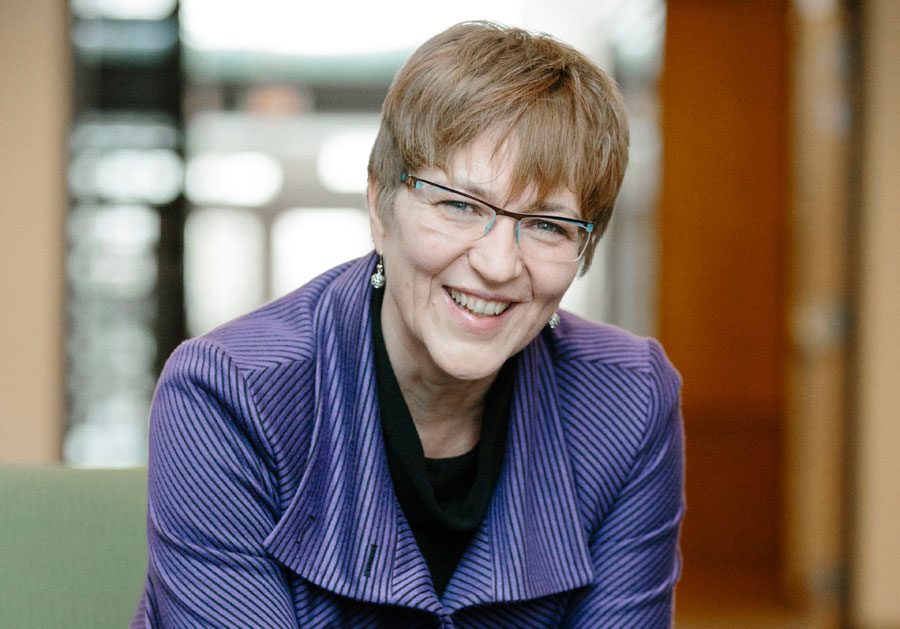 The eight or so students who gathered to complete their course evaluation for Law 498.3, otherwise known as Law and Happiness, seemed relaxed. As they finished putting down their thoughts about the class, one student commented, "This is definitely the first time I've run out of room in the comments section of a course evaluation." Without hesitation, the rest of the students agreed.

Rewind to September when the College of Law began offering Law and Happiness, a seminar class born of Assistant Professor Marilyn Poitras' research in human interest and motivation. The purpose of the class would be to explore how the law affects field workers, lawyers and judges while students offered their own theories about what a balanced life means and if law and happiness is, in fact, an oxymoron.

While the class itself was new to the college, the idea had been forming in Poitras' mind for quite some time.

"I have been doing research on what makes people tick for most of my adult life. As a young adult, I worked in the criminal justice system and saw people at their lowest," she said. She also worked closely with professionals who worked with first responders deal with the trauma they had seen. Such experiences, combined with her interest in positive psychology and alternative health, got her thinking about how criminal lawyers might deal with the horrific stories they are made privy to on a daily basis. Her research ballooned from there.

"I started looking into the stats and they weren't good. Depression, suicide and divorce rates in the legal profession are high." Her research showed that the upward slope in these rates begins in law school—and they don't tend to go down.

These staggering rates, along with the rates of women and minorities leaving the profession, motivated Poitras to dig deeper into the connection between the health of the justice system and the health of a lawyer. While interviewing a medical doctor at Royal University Hospital about the health of legal professionals, the term "lawyer's liver" was one of the first words out of his mouth. Poitras was shocked. "It's a real thing and we're not talking about it, or at least not talking about it early enough."

She said while the medical and other professions may have similar issues, there may be more outlets for people in those professions, such as medicine, to talk about the issues.

"Lawyers are trained to strip away everything but the legal issue at hand, which is great for the profession, but not so great when it comes to dealing with issues at home. There is evidence that when you numb yourself to emotions you deal with at work, you can't selectively numb yourself to those feelings in other situations," she explained.

As an upper-year elective, Law and Happiness is taught in seminar format. In it's debut, 14 students enrolled. One of those students was Keith Pratt, a second-year law student with an interest in positive psychology. "To be honest, I took the class because I wanted to learn to become a happier person," he said. "I also wanted to take time to learn how to build strong mental fortitude to deal with the stress of being a law student and in the future, working in the legal profession."

For Carly Romanow, a third-year student from Regina, the reason for taking the class was Professor Poitras herself. After taking classes with her in first and second year, Romanow didn't think twice about enrolling in Law and Happiness.

"During one of her lectures in first year, I had that moment where I thought ‘this is what law school is all about.' Her teaching techniques allow me to really think about the material and challenge us to view concepts from different perspectives."

During the first month of the class, Poitras introduced the class to the research she had been doing on well-being and issues in students' lives and legal professionals. While the students were a bit quiet in the first few classes, it didn't take long before they were actively participating in discussions.

"By about the third class, students really started to open up about their experiences in law school." Poitras suggested that while students come to law school with an idea of who they are and why they want a law degree, those feelings dissipate and switch to thoughts like, I hope I get a job. I hope I get an articling position. Should I be panicking?

Along with learning about the different types of tools that can be used to deal with depression, alcoholism and family breakdowns, students were required to submit weekly journal entries. Each was also given a research assignment that needed to cover the topics of happiness, career choice and law. They then presented their research over a span of four classes, concluding with a 15-minute presentation that was recorded on video.

"Once the students started sharing their research, they lit up like Christmas trees," said Poitras. "They began complimenting each other and cross-referencing each others' research, saying things like ‘oh wow, I never looked at that issue like that before,' and through it all, the students created an atmosphere of comfort and trust."

In the future, Poitras would like the class to look more broadly at the psychological state of not only students and lawyers, but judges as well. She would also like to invite more guest lecturers and would want students to hear from legal professionals who are dealing with, or have dealt with, wellbeing issues.

Furthermore, she would like to see the students in Law and Happiness work with the law school to develop services or programs that could be implemented to improve happiness while they are pursuing their law degree.

"Even the smallest initiatives can make a difference," said Poitras, "including yoga or meditation classes, social options for students that don't include alcohol, or just a place to openly talk about problems without feeling ashamed."

Sarah Trefiak is communications and alumni officer in the College of Law. This article originally appeared in the winter 2014 issue of the college's Of NOTE magazine.