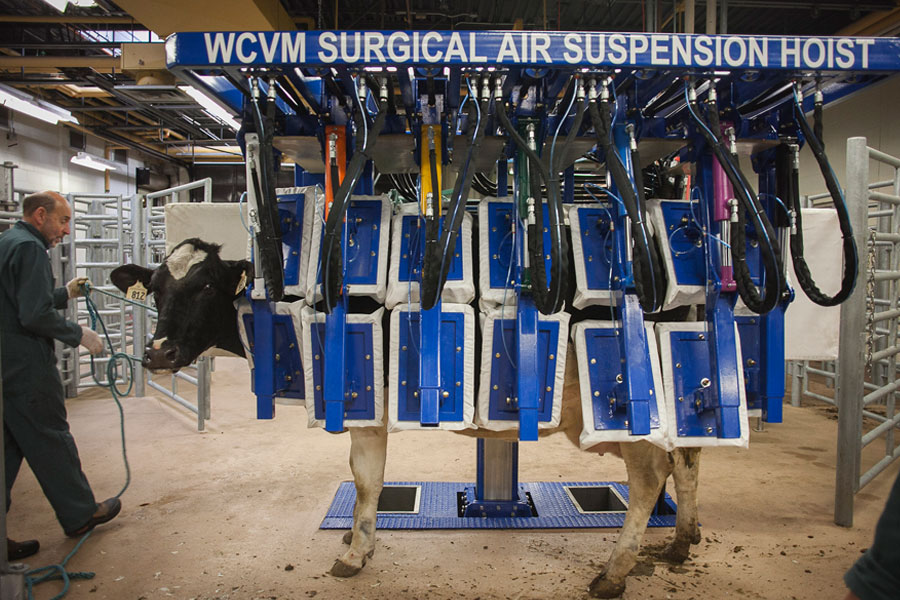 But he's not planning any Halloween pranks. The associate professor at the Western College of Veterinary Medicine (WCVM) is talking about regaining the use of the tilt table, a piece of equipment recently refurbished and re-installed in the WCVM Veterinary Medical Centre's Large Animal Clinic.

The hydraulic tilt table is an indispensable tool primarily used for bovine hoof treatment and trimming. It is also invaluable for examining and treating injuries and problems with bull genitalia and cow udders.

"Using the table is much safer and easier than trying to get underneath to examine the animal," said Clark, who specializes in large animal internal medicine. "It's an optimal environment for doing a thorough examination and the proper preparation if you have to do some suturing."

While the WCVM's table may appear new, it is actually an updated version of the device developed in the mid-1970s by Arnie Brockman, an engineering consultant from Humboldt, Sask.

The design allows a cow to walk in between the two sides of the table, which can accommodate animals ranging in size from calves to bulls weighing over 3,000 pounds. Once inside, the animal is gripped from above and the pressure of the airbag lining is adjusted to hold it. Then a hydraulic drive lifts the animal off its feet and smoothly flips it onto its side so it is lying on the table.

After veterinarians finish a procedure, the table returns to an upright position.

"The table's advantage over other designs is a combination of things," Clark explained. "It holds a variety of sizes, the method of restraint involving air bags is better for the animals, the hoofs as well as the genitalia and mammary glands are easily accessible once the animal has been tilted, and the animal can just walk away once it's been placed back down on the floor."

After 40 years of regular use, the original tilt table had to be retired in 2013 when it started having mechanical problems. Clark and other WCVM large animal clinicians had to resort to an old-fashioned system of ropes and pulleys for examining and treating any hoof issues, which posed a greater risk of damage to both the clinicians and the animals.

The U of S began a search for an engineering company that would recondition the equipment and make some upgrades. The successful firm was RMD Engineering, a Saskatchewan company that has worked on other university projects including an equine hoist system.

"They saw it as a real challenge and had fun working with it," said Clark. "They did an incredible job of adapting the table."

The company completely replaced some of the parts and made several improvements including the addition of air pressure sensors to the airbags, taking the guesswork out of determining how much pressure to use.

Clark is relieved to have the table back, not only because he is tired of visiting his chiropractor but also because it speeds up learning for the college's veterinary students. With the table exposing all four feet at once, four students can work on an animal while it's lying quite comfortably.

"It's a great teaching tool, and it's amazing to see the tilt table in action," said Clark. "It has the same movement as before, but it's been completely redone and repainted dark blue with a stainless steel control panel, so it's swankier."

As for the cows, Clark said the renovated table with its upgraded hydraulic system offers animals a much smoother ride during their bovine pedicures.

Lynne Gunville is a freelance writer based in Candle Lake, SK.