Born and raised in Dayton, Ohio, Brad grew up south of the border watching his father play professional hockey. In 1976, when he was nine, his family moved to Saskatoon, where he played minor hockey and had the chance to suit up for a Junior B game. As he started his education at the University of Saskatchewan (USask), he also began officiating minor hockey, eventually working his way up to the Saskatchewan Junior Hockey League. “Officiating has always and continues to be my only job since the fall of 1998,” said Meier. “After I graduated from the College of Physical Education and then the College of Education, I was hired by the City of Saskatoon Fire Department where I was a full-time firefighter.”

“My involvement with Hockey Canada led me to take on some assignments world-wide. I was fortunate to officiate the 1995 World Juniors, the 1996 World Championships, and the 1998 Olympics in Nagano, Japan,” said Meier.

After being hired by the NHL in 1998, Meier earned opportunities to work the NHL All-Star Game in Montreal (2009), the Heritage Classic in Calgary (2011), the Sochi Winter Olympics in Russia (2014), the Centennial Classic in Toronto (2017), the Stanley Cup final (2017), and most recently, the upcoming Heritage Classic hosted close to home in Regina (October 26, 2019). 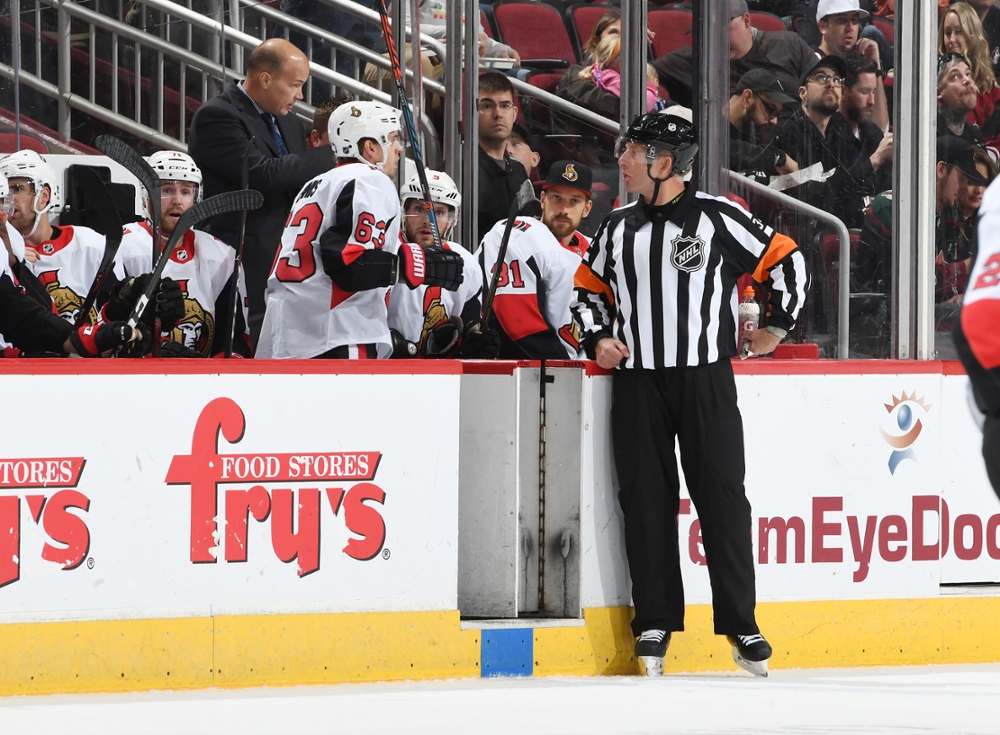 “I feel very honoured to be selected to work this game. Having grown up in Saskatchewan, cheering for the Saskatchewan Roughriders, it makes it special for sure,” expressed Meier.

With the Heritage Classic hosted by his home province, Meier is looking forward to having family and friends from Saskatchewan attend the game. While these special events can be a whirlwind of excitement and emotions, he won’t forget to take a step back and enjoy every moment.

While officiating has become his career and has led to some outstanding opportunities and experiences, Meier knows that there are also some less glamourous parts to the job.

“It is a career choice for me so I can and do handle criticism, it’s part of my job,” said Meier, noting that it is important to remind players, coaches, parents and spectators at all levels that officials aren’t perfect but always strive to do their best, just like the players on the ice. “It’s a shame how many talented, younger officials do not pursue officiating to a higher level due to the level of verbal and sometimes physical abuse.”

As with any career, there are many ups and downs. For Meier, he notes three memorable highlights in his career; his first NHL game (1999), the gold medal game at the Sochi Olympics (2014), and last but not least, the Stanley Cup final (2017) when his wife and three children were able to attend. While he doesn’t necessarily have a favorite player to officiate, he would be remiss if he didn’t mention the excitement of being on the ice with dynamic players like Connor McDavid and Sidney Crosby.

But with the good, comes the bad. Meier said there are many unfortunate moments as an official, but the worst came last season when he tore his hamstring in November and missed seven weeks. Having never been hurt before, it was difficult to not be out on the ice.

Many NHL officials don’t have designated paths that lead them to the big leagues, but for Meier, he was quick to give credit to his physical education degree and to the University of Saskatchewan.

“I feel that my degree helped me learn discipline and dedication. The training that is required to continue in my career has also helped keep me healthy and for the most part injury-free,” said Meier. “I love the fact that the University of Saskatchewan is such a well-respected academic institute and I consider myself part of a proud alumni group.”

Meier’s advice to current students is simple: “A university education isn’t about who is the smartest, but rather who is dedicated to being a good student. It is such a wonderful experience that no one can take away from you.”