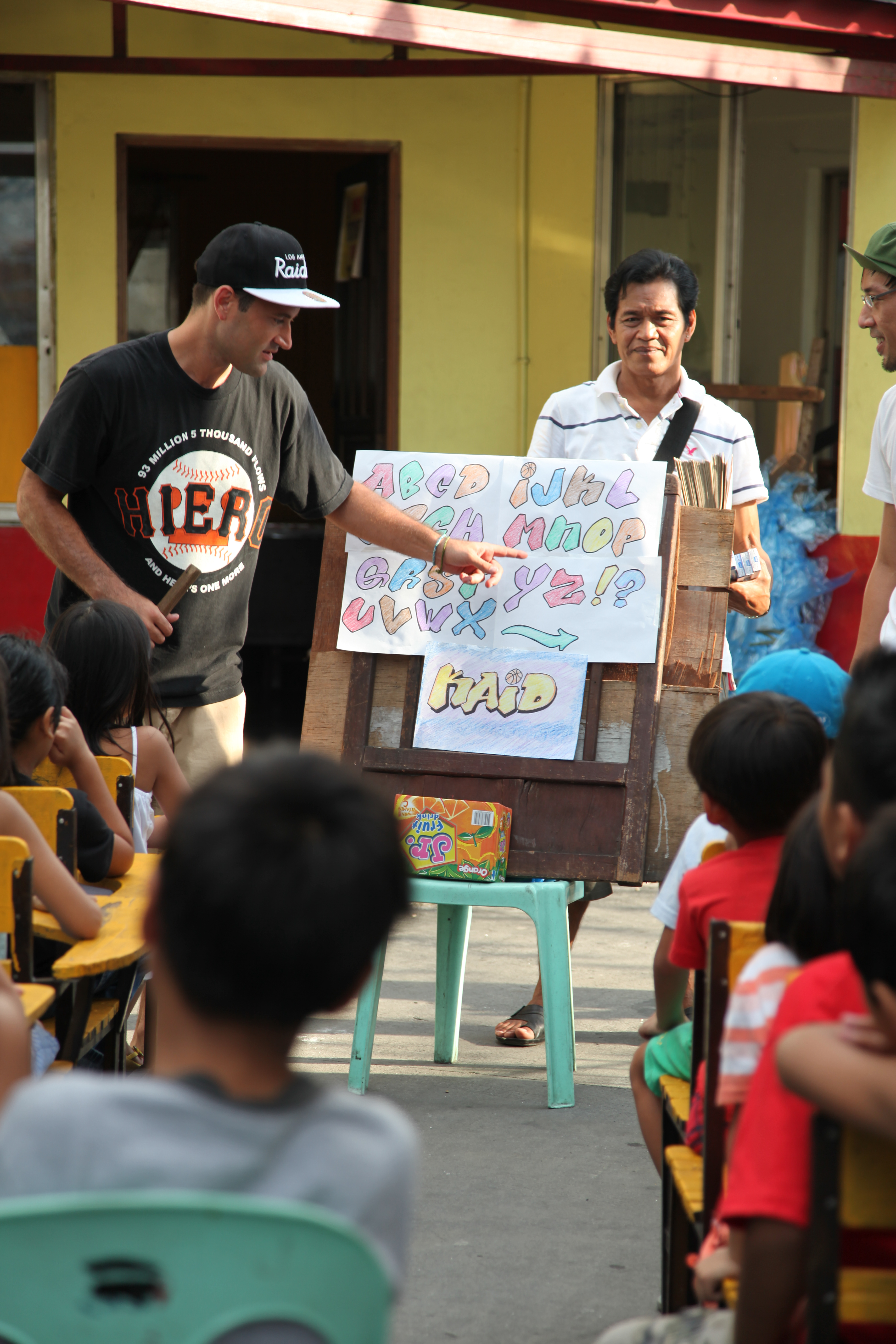 "The foundation is about the kids, it's about inspiring them to be creative… I know they have the ability to make art, but they are lacking supplies, community leaders, sometimes parents… I thought I could help."

While living in Manila, Ashton ventured into some of the city's most impoverished neighbourhoods to take photos and came across dozens of areas where he wanted to teach kids about making art. The kids, he says, are eager to draw bright, colourful pictures of palm trees, the Philippines' flag, and especially their own name.

"I go into these poor areas where the people have very little and I teach art," said Ashton. "I bring markers, pencils and papers and teach kids how to turn the letters of their name into art."

An art class with Ashton and the Homeschool Foundation is like an English language class with a creative flair. Along with art supplies, Ashton tries to bring a solid meal to the group as well. Most days there are anywhere from 20 to 100 kids, depending on the area, he said.

However, one day, while in a search for new places to photograph, Ashton found himself amongst the pastel-coloured gravestones and tombs of one of Manila's catholic cemeteries, and living there were literally hundreds of people. Families hunkered around cooking fires while makeshift clotheslines were hung from tombs, draped with the morning laundry.

Ashton said he couldn't believe his eyes. Even after months of exploring the sprawling streets and back-alleyways of Manila, he had never seen anything like this.

"There must have been 150 people at least that I could see, and that was only about a quarter of the cemetery," says Ashton. "The saddest part is that there are kids everywhere… families of five, six, or more sheltered under larger graves, some with roofs even. I had to do something."

So, in the tradition of the Homeschool Foundation, Ashton arranged a time to come back to the graveyard, bringing with him supplies, food, and 120 envelopes "so the kids have something to take home at the end of the day, a place to keep their art."

Ashton said of all the days he spent teaching in the back alleys and slums, train tracks and industrial zones, nothing has compared to the overwhelming enthusiasm of hundreds of Filipinos living in a cemetery in Manila.

Ashton thinks with a few supplies and some enthusiasm, he has inspired young artists to make the places around them more beautiful.

On most Homeschool Foundation visits, Ashton leaves a piece of his recognizable street art where the locals can enjoy it, but "there wasn't anywhere to hang something in the cemetery."

To find out more, visit http://kaidashton.blogspot.com/