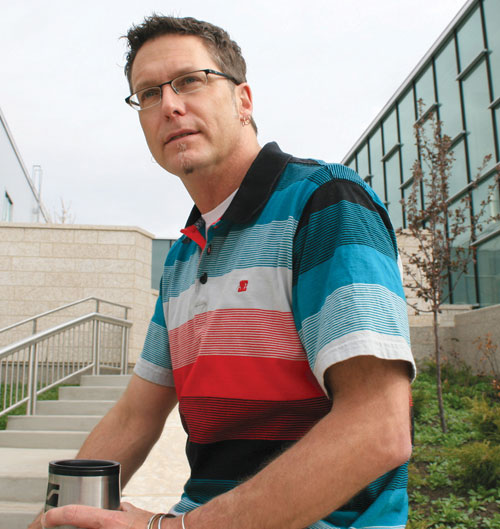 "The opportunities this building will create are amazing but it's hard to grasp the enormity of executing a project of this magnitude, how complex it is to actually pull off one of these," said Ewart, who has been working on InterVac for eight years, first with Facilities Management Division and now as associate director of operations and maintenance with VIDO–InterVac. That complexity comes from the fact InterVac is the first facility in Western Canada built to the exacting specifications required to contain level three pathogens like avian influenza, Mad Cow Disease or tuberculosis, all in the quest for vaccines to protect both humans and animals.

The building is set to open in September, many months behind schedule. Ewart said the project struggled with a shortage of the specialized tradespeople needed to handle construction. "The (building) techniques are very specific and the design requirements very tight because it is a bio-containment facility. We weren't happy with the delays but this quality of construction work hasn't been seen in years."

Monitoring construction since it began almost three-and-a-half years ago involved not only Ewart and other university personnel but also PCL Construction, the project manager, design consultants and the high containment architects and engineers involved in the job. It was more than seen on other construction jobs but "there were a lot of times that we had only one shot at getting it right," he said.

InterVac is a dual-wing structure connected to the existing VIDO building by an elevated walkway. In the laboratory wing, the ground floor is taken up with level three containment labs as well as office space. The first floor has administrative space as well as the special high-efficiency particulate arrest (HEPA) filters that serve the labs. Level two labs occupy the second floor. The exterior of the lab wing is predominantly glass, he said, both to maximize light penetration into the interior spaces "but also to allow people to see into that side of the building."

The animal wing was the more complex to build, he said. Its ground floor is largely multi-species accommodation, "from small rodents to livestock," with a capacity that makes InterVac one of only about six such facilities in North America. The multi-species, multi-pathogen research capabilities of InterVac "is where this facility will shine." The upper level of the animal wing houses the mechanical systems for the entire structure.

With the contractor completing the last of the building deficiencies, the commissioning team will move in, the culmination of two years of testing and checking every component of the building as it came together, from concrete strength to light switch operation. Ewart explained the commissioning process begins with testing the building systems under normal operating conditions, then "challenging the building" by creating problems. An example might be to shut down a ventilation fan to see how other systems respond.

The final step in commissioning is what Ewart termed a functional operating systems test. It will require populating the building with people and animals (no pathogens allowed yet), then operating it flat out for 21 days while continuing to present challenges to the systems. "This building has to work 24-7 under any conditions and if anything goes wrong during the test, we go back to the start and begin the 21-day test all over again."

The external commissioning and certification agents for InterVac are the Canadian Food Inspection Agency and the Public Health Agency of Canada, "and their standards don't just apply to the building; it's just bricks and mortar," said Ewart. "It's also about how people conduct themselves when they get in here."

To that end, a lot of effort has gone into preparing standard operating procedures that cover "everything you would do in the building – how you enter a lab, how you glove up and how you dispose of those gloves, what to do if you drop something or a fire alarm goes off or the lights go out. It's absolutely critical that we have the right training for those working here."

Once the 21-day operating test is successfully completed, "then comes the one process that's completely out of our hands, and that's certification, and we cannot import level three pathogens until we're certified."

The certification process involves turning the building over to the two external agencies for about a month to allow independent testing. "Then they go away, and come back with questions," said Ewart. "On their website, they say it's about a three-month process from start to finish, and we need two different certificates—one for the animal wing and one for the labs so realistically, we don't expect we'll be certified until 2012."

While the InterVac project has been a long time in development, Ewart said it benefited greatly from the experiences of others in the relatively small bio-containment community in Canada and the United States. "Everyone has been very co-operative. They've opened up their budgets and their books to us and we've been the benefactors of very recent learning from other construction projects."

InterVac also benefited from stipulated price contracts for construction, some of which date back to 2007. As a result, and despite the delays, the $140 million project is only about $2 million over budget but Ewart expects that figure will continue to decline. He pointed out InterVac has a dedicated operations and maintenance budget that involves a number of funding partners and is separate from the university's budget.

As opening approaches, Ewart said VIDO–InterVac is developing plans for allocating space in the labs to not only U of S researchers and students but also to those from other institutions. He said the vision for the facility is not to have permanent scientific staff but rather to make it available on a project by project basis.

In the end, InterVac will be a marvel and a critical facility in the effort to identify and control existing and emerging level three diseases, but it will be one very few people will ever fully experience. "It's the best building we can't show anybody because of the nature of the work."