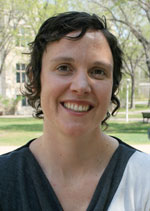 T. L. Cowan, an assistant professor who teaches in the Women's and Gender Studies (WGST) program in the Interdisciplinary Centre for Culture and Creativity (ICCC) and has an academic appointment in the Department of English, said when she joined the U of S last June, she began looking for a way "to make visible WGST in the context of its new position within the ICCC." She decided on a lecture series that would both build profile for feminist and interdisciplinary research and celebrate the important role of community.

What makes the New Feminist Research Lecture Series unique is the incorporation of social events that follow the academic presentations. "Part of feminist methodology is to be in dialogue with colleagues," said Cowan. The goal was to create lectures that were destinations for undergraduate and graduate students, faculty and staff, and the public "where they could listen to a lecture, have a question and answer period, then have a party afterward. It's a little bit less staid than what happens in a seminar room in the Arts Building," she said, "and combining the academic and social components infuses a new energy and a sense of occasion."

Cowan said drawing the public to campus is a key objective of the series. "Speakers get to be a bit of a lightning rod for the local community to get together in a more casual, more informal way." And for a faculty member new to the U of S, "a great way to meet people is to host a party."

To get the series rolling, Cowan identified a couple of speakers working in small WGST programs who could not only talk about their research but also about the challenges and benefits of their particular institutional structures work as well as their methodologies. Cowan said the series focuses on emerging pre-tenure scholars "to give them exposure for their work as they build their tenure file but also to keep us up-to-date on work in other programs."

The next step was to secure funding, which she did from the President's Advisory Committee on the Status of Women, the Role Model Speakers Fund through the President's Diversity Enhancement Fund and from various departments and campus organizations.

The first event in the New Feminist Research Lecture Series took place Jan. 26 and featured Ilya Parkins from the University of British Columbia, Okanagan, whose presentation was entitled Timing Femininity in Christian Dior's Self-Fashioning. The location was the Gordon Snelgrove Gallery and the lecture was followed by a wine and cheese reception. "I was expecting the eight students from my seminar class and five other people, but we had 55. It was totally beyond what I expected. We billed the evening as a gallery event so people kind of dressed up," she said, "and they stayed for the wine and cheese. I think people have a lot of curiosity around feminist research."

The second lecture was held April 1 in the Edwards School of Business Goodspeed Theatre with Jasmine Rault, associate professor of women's studies at McMaster University, presenting Mediating Affect in the Queer Americas: Cases of Creative Resistance. It was followed by a Latin dance party in Louis'. The numbers were a bit lower than the first lecture "but everybody had a good time."

Cowan said the mandate for the series is unique. "The social life of feminism doesn't get talked about too much but it's absolutely central to what we do. Feminist and queer scholars at many institutions can feel, or be made to feel, marginal. My goal is to create a couple of nights a year when we're absolutely central."

Next year's plan is to host one scholar "from away" and one from the U of S. "I've always thought I'd like to recognize the important feminist and sexuality work that happens across campus at the U of S. And I think the research series models for students the kind of work they can do in the context of feminist research and sexuality studies in rigorous and imaginative ways."