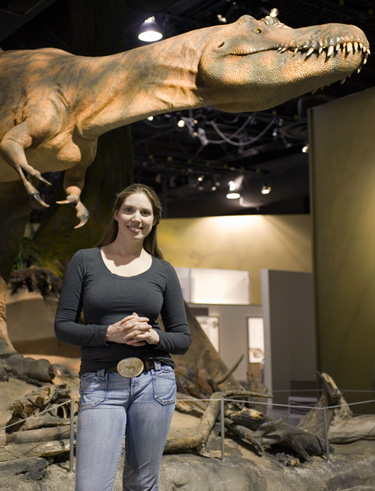 For Lara Shychoski (BSc'02), studying dinosaurs was never what she set out to do, but now the 30-year-old finds herself living in Drumheller, Alberta, in the midst of completing her PhD from the University of Alberta. And with a fivemonth-old daughter running around, Shychoski says she feels like a kid once again.

"It's so interesting now, being with my first child and living in Drumheller, and there are dinosaurs everywhere," says Shychoski. "Although most of the paleontologists I know around here are so overwhelmed by their surroundings, that their kids want nothing to do with dinosaurs as they grow up… I always thought I would grow up to be a veterinarian, and here I am researching dead things. It's a long way off from where I thought I would be at this point in my life."

Many archaeologists will tell you that studying fossils such as dinosaurs is the search to understand ourselves—where we came from and how we got to this point of evolution. So when Shychoski says she is researching dead things, it seems in jest. In fact, she has spent the last several years, including the work she accomplished on her masters in Bristol, England, re-animating the king of all dinosaurs, the Tyrannosaurus Rex.

Her research is changing long-held theories on the movement of the T-Rex, and more specifically, the way that they devoured their prey. One of the conclusions she has come to is that T-Rex did not thrash around with prey in its mouth, like a shark for example, but rather by moving its head up and down, front to back, more in the same way that a hawk or eagle would pull back the flesh of its kill. Makes sense, she says, "as they are both raptors."

Shychoski has developed techniques that utilize the technology of CT scans to recreate the entire head of many of the world's largest T-Rex specimens, including Scotty, the beloved mascot of Eastend, Saskatchewan's T-Rex Discovery Centre.

"Scotty is possibly the largest T-Rex out there," she says. "There are others, like Sue from the Field Museum in Chicago that have been described as larger, but when you examine the bones and the skeleton of Scotty, you can see that that he is so robust. His bone structure and shape is just fascinating."

With a skull that measures five-feet long, recreating Scotty was no simple task, as CT scanners can usually handle about two-foot specimens. So, Shychoski ran 30 separate pieces of Scotty's skull through the scanners before coming up with enough information to recreate a 3D model. It is providing valuable information about the strong and weak points of T-Rex specimens. And despite what we might think, there are actually a dozen different species in the family Tyrannosauridae, "and some were as large as Scotty or as small as a dog, but they all exhibit similar traits."

Although the fossils she studies are technically no longer bones by the time she runs them through the scanners, it was studying bones as an undergraduate at the University of Saskatchewan that sparked her interest in the field.

Shychoski's first encounter with the world of bones was in a class taught by Professor Brian Pratt, now head of the Department of Geology. He taught Shychoski about sedimentary and the environmental factors that make the ground ideal for finding fossils. He took the class out into the field on several occasions, and in her words, it was "addictive."

Having had a taste, Shychoski enrolled in more classes of the same vein, including a class taught by Professor Ernie Walker (BEd'71, BA'72, Arts'73, MA'78). Walker's area of expertise in anthropology and archeology fascinated Shychoski. So when Walker was approached by the RCMP in 2002 for help on a difficult case, a group of students from the U of S, including Shychoski, were eager to help despite the difficult and horrifying environment they were about to be thrown into.

Professor Walker led his team of researchers to the Robert Pickton pig farm near Port Coquitlam, BC. The RCMP needed help identifying the bones of what we now know were dozens of women from the
Vancouver area.

"If you thought about what you were doing too much, it would become difficult. But when we went there as students, you have a mindset that you know what you're doing, and every bone we found would tell us a story." Shychoski says the RCMP were very good at making sure the efforts of the research team were put in context—helping the families of the victims—and that gave them some comfort despite the situation.

"A lot of people did have a tough time working on the farm, especially with the media there and their exaggeration of what was going on. But the whole experience with Dr. Walker got me thinking about what we can learn from bones."

Bones tell the story, and for Shychoski, it's taken her from the Pickton farm to the heart of Canada's dinosaur Mecca. She says she has seen bones in all sorts of decomposition and how that affects their fossilization.

"I look at bones differently now as they all have their own characteristics. The things we do during our lives, like the amount of exercise and how that translates into muscle and bone growth, tell a story about us. I want to know how extinct animals used their bodies, and looking at bones is the best way to find that out."

This story originally appeared in the Spring issue of the Green & White alumni magazine.