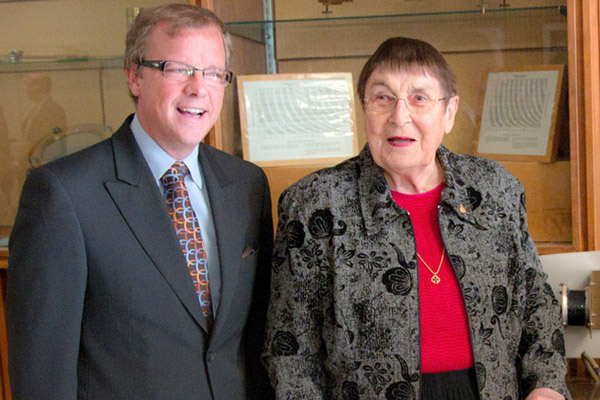 Fedoruk, renowned medical physicist, outstanding athlete and the province's first female lieutenant governor, passed away at her home in Saskatoon Sept. 26. She was 85.

As a medical physicist, Fedoruk was the sole woman on the research team that developed the world's first Cobalt 60 cancer therapy unit back at the U of S in 1951.Â The device and techniques Fedoruk helped develop are used to this day to treat cancers around the world.Â Daily, more than 45,000 radiation treatments are delivered in over 80 countries.

Premier Brad Wall announced Oct. 3 that the CCNI will now be known as the Sylvia Fedoruk Canadian Centre for Nuclear Innovation.

"Few individuals can say that they touched the lives of millions of people, but that is the case with Dr. Fedoruk," Wall said.Â "According to the Canadian Medical Hall of Fame, her groundbreaking research in cobalt radiation has helped more than 70 million people worldwide.Â It is only fitting that we honour her by renaming the facility after her legacy.

"Sylvia Fedoruk was one of Canada's nuclear medicine and science policy leaders, as well as a trailblazer in public service," U of S President Ilene Busch-Vishniac said.Â "As part of the U of S team that developed the world's first successful Cobalt-60 radiation treatment, her ground-breaking research has had global impact, helping to save the lives of millions of cancer patients around the world and laying the foundation for U of S leadership in nuclear research, training and innovation."

"We are honoured to be chosen as part of the Province of Saskatchewan's recognition of Dr. Fedoruk," CCNI Interim Executive Director John Root said.Â "She was an outstanding nuclear scientist and great Canadian.Â This new name really energizes us to deliver on our purpose, placing Saskatchewan among global leaders of nuclear research, development and innovation, and creating opportunities for a new generation of Saskatchewan pioneers to build on Dr. Fedoruk's legacy."

Located at the University of Saskatchewan in Saskatoon, the Canadian Centre for Nuclear Innovation was established in December 2011 as an independently incorporated, not-for-profit subsidiary of the U of S and funded by the Province of Saskatchewan.Â More information is at the centre's website, www.ccni.nu

A state funeral will be held for Dr. Sylvia Fedoruk in Saskatoon on Friday, October 5.