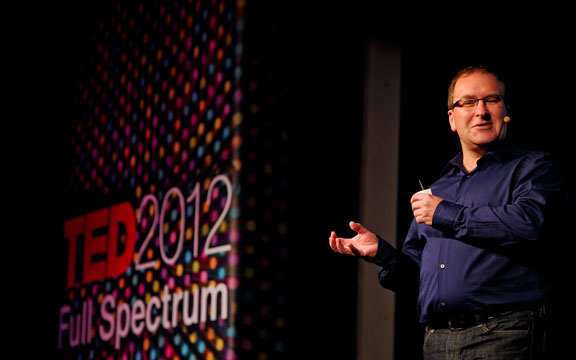 "After my presentation, dozens of people came up to me and told me how much they appreciated my talk," said Maber from his office in the Edwards Building. "It is so exciting to plant an idea, a seed, and to see what happens."

Maber, a human resources and organizational behavior expert, presented at the conference on a self-awareness tool called the Johari Window—a technique used to help groups of people in corporate settings to solve problems. The presentation must have been a success, said Maber, as the organizers of the TED Conference approached him shortly afterwards with another request.

"They asked me if I would be interested in doing a voice-over-animation for a video on a concept called the Ladder of Influence … I said yes."

The Ladder of Influence, explained Maber, presents people with situations like being cut off in a parking lot and asks what kind of patterns would cause a person to react in certain ways.

It is these kinds of concepts that Maber has studied and taught for years, first as an undergraduate student at the U of S and then as a master's student at Royal Roads University. He is working on his PhD from Fielding Graduate University while continuing to teach, but his experiences with TED have changed his philosophy on teaching.

"TED is helping to change the ‘capital-C classroom' into a global classroom where people from around the world can share ideas and learn from each other in the form of short presentations. Every day more and more educators around the world are using presentations from TED in their own classrooms, and it is this dissemination of ideas that we should not take for granted."

Maber is excited to see a video of his presentation and the voice-over animation that should be available in the next couple of months for viewing on the TED website.  Until then, he is keeping in touch with his classmates in the global classroom.