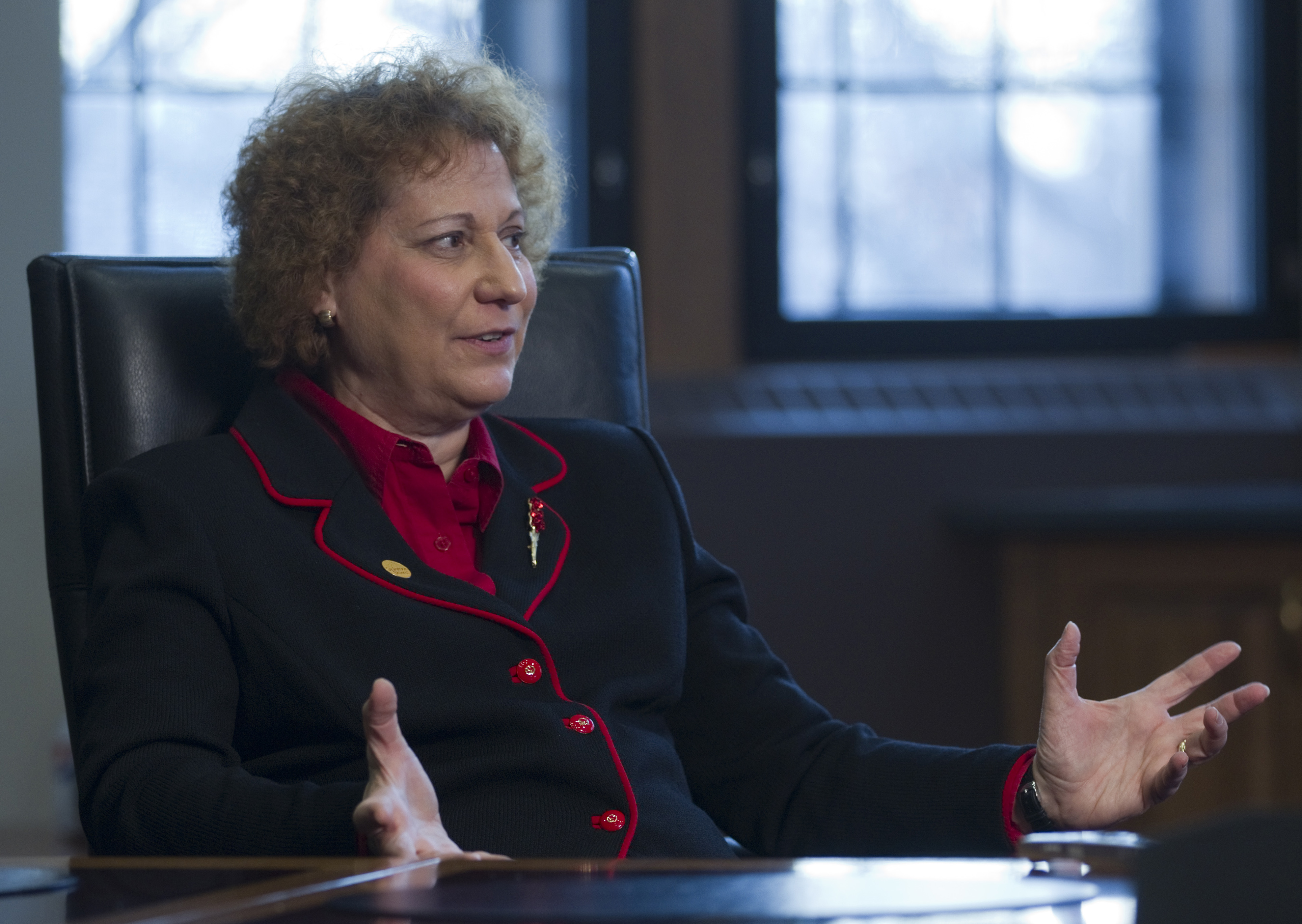 Currently provost and vice-president academic at McMaster University, Busch-Vishniac was introduced Dec. 19 as the university's ninth president. She will replace Peter MacKinnon who will step down June 30 after 13 years as president. After a late- night flight to Saskatoon from a family reunion in Philadelphia, Busch-Vishniac spent the day on campus meeting and greeting, addressing a large crowd in Convocation Hall at the announcement of her appointment, lunching with various officials, touring about and doing media interviews, including a wide-ranging discussion with On Campus News. She started by addressing her candid approach to answering any and all questions.

"I don't hold back," said Busch-Vishniac, who is warm, engaging and smiles easily. "I learned as a kid that I can never successfully lie … so I tell it like I see it."

And the way she sees it is that the University of Saskatchewan's strategic objectives blend almost seamlessly with her own. The McMaster website listing her priorities – systems renewal, development of a new budget model, enrolment planning, teaching and learning, community partnerships, improving the student experience – could just as easily appear under the U of S banner. "I think that's an absolutely fair assessment. There are a lot of similarities … and in particular the aspirations, the areas on which we want to focus are very, very similar, and that's actually reassuring."

The fact those aspirations are very clearly defined in the university's mature integrated planning process was one of the attractions to the job of U of S president, she said. And it is not an apple cart she plans to upset.

"The fact that those plans exist means that it is a framework for me to build upon. I'm not seeking to change the integrated plans; I'm seeking to make sure that I can work with them and understand what drives them, and then build on that."

Key for Busch-Vishniac early in her tenure will be to listen, a lesson she learned when she took over as McMaster provost after serving as professor and dean of engineering at Johns Hopkins University.

"A very smart person once told me that there is almost no such thing as an academic emergency. There are emergencies on campus and they can be very serious, but there usually aren't academic emergencies so what I've learned moving into new positions is that people want to tell you what they value, the history and traditions of the institution, and it's very important to hear that."

Referring to the former mayor of New York City whose signature line was "How am I doing?," the president designate said she feels "almost as if I want to do is the Ed Koch model for a while, asking what do you think, what are the issues?"

Asked if she can characterize her leadership style, Busch-Vishniac smiled and replied, "probably not, but let me do my best. I would consider myself someone who likes to try to build consensus but I also like to have lots of different perspectives. I'm also adamant that at some point, decisions have to be made and I'm fully prepared to make them and fully prepared to accept responsibility for having made them."

She went on to describe herself as somewhat of a contrarian, a person who wonders if, when others are saying it might not be the right time to do something, "then maybe it's exactly the right time." A perfect example is her hiring of 41 new faculty at McMaster during the recent economic downturn when peer institutions across Ontario opted for hiring freezes. It was a move that not only built capacity, but also intense loyalty among faculty unable to secure permanent employment elsewhere.

That kind of risk-taking is a hallmark of Busch-Vishniac's leadership, and it's something she encourages in the people she works with. "Some of the risks certainly aren't going to pan out but if you don't take those risks, then the opportunities for enormous payoffs are gone."

Considering the situation in Saskatchewan with only two universities compared to Ontario's 22, Busch-Vishniac argued that, ironically, the lack of competition creates "a moral imperative to take some risks because the push for improvement must come from within instead of from an external pressure." While competition generally forces improvement in products or services, "my experience for Ontario universities has not fit that model. There was a general fear of being innovative and taking risks because of the intense competition. It has actually worked to the detriment of the province rather than to its benefit, at least in the time I've been there."

Along with her administrative experience at Johns Hopkins and McMaster, Busch-Vishniac brings to the president's office the sensibilities of a mechanical engineer and researcher, which also inform her thinking about leadership. Engineers and administrators are both problem solvers, she said, who "might want to brainstorm, talk to people, find out if anyone has solved this problem before and how they did it."

Occupying a president position means Busch-Vishniac will find herself further from her true passion – research. As McMaster provost, she has been able to continue to publish thanks to collaborators who "make the impossible possible, but to be fair, I think that as president, especially a new president walking in the door, I have so much to learn that the chance that I will have any time to do any directed research is between zero and none. Do I think I will miss that? Yes and no.

"The yes is in the sense that I find it enormously stimulating to pick an area and become the world's leading authority in that area. No because a lot of running a university is very similar to a lot of the research we do in a slightly different field. Being able to say, ‘gosh, what do we think post-secondary education will look like 20, 50, 100 years down the road? What should it look like? How might we take the lead and get there?' That's exactly the sort of research I could imagine doing, and doing it from the leadership position of the university means that I've got 20,000-30,000 people here who'd be interested in participating in that as an experiment."

On a personal note

Ilene Busch-Vishniac was born Jan. 28, 1955 and grew up in Fairless Hills, Pennsylvania. She studied piano at the Eastman School of Music while taking classes at the University of Rochester but one semester in, she realized the performing arts were not for her. A freshman class called physics of music piqued her interest in acoustics so Busch-Vishniac switched to physics and mathematics for her undergraduate degrees.

She earned masters and doctoral degrees in mechanical engineering from the Massachusetts Institute of Technology before joining the Acoustics Research Department of Bell Laboratories. In 1981, Busch-Vishniac moved to the mechanical engineering faculty at the University of Texas and in 1998, joined Johns Hopkins University as professor and dean. In 2007, she accepted the position of provost and vice-president academic at McMaster University in Hamilton, Ont.

Busch-Vishniac's research is focused on acoustics, particularly noise control and transduction. More recently, she turned her attention to characterizing and controlling noise in hospitals. Busch-Vishniac has published extensively and holds nine U.S. patents on electromechanical sensors. She has also done extensive research on how best to educate people in engineering. Her innovative work has earned Busch-Vishniac an impressive list of prestigious awards for both teaching and research.

Busch-Vishniac is married to Ethan Vishniac, who was on hand for the announcement of her appointment as president designate. Currently a professor in the Department of Physics and Astronomy at McMaster University, Vischniac is also editor of The Astrophysical Journal. An expert in the areas of shock waves and magnetic fluids, he is seeking a faculty appointment at the U of S.

The couple have two daughters – Cady, 26, who lives in El Paso, Texas, and Miriam, 23 who resides in Washington, D.C.

Devoted dog owners, the Vishniacs will unfortunately be moving into the President's Residence in Saskatoon without a pet. "For the first time in about 30 years, we are dogless," said Busch-Vishniac. "but once we're here, we fully expect to have a husky."