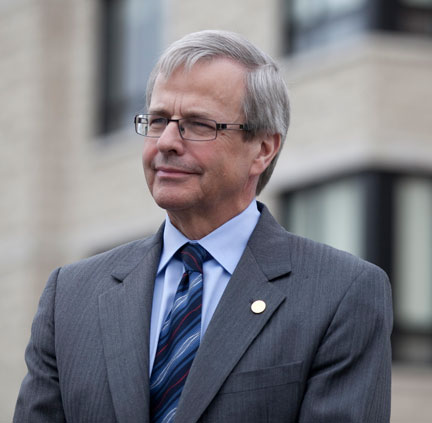 Speaking in Convocation Hall April 9, MacKinnon said he chose to stay away from a typical "last" address featuring "recitations of progress real or imagined, self-justifications and perhaps a few ruminations on what is or might have been." Those perspectives, he said, would be contained in a book he plans to write after he leaves office June 30.

Instead, he chose to discuss a growing reliance on evidence-based decision making, strong governance and a convergence of social, political and institutional ambitions as strengths of universities, including the
U of S.

While not always complete or irrefutable, MacKinnon said the information available to university about activities, effectiveness, reputation and even administrative efficiency is much broader than ever before "and it has to be faced, considered and taken into account." Such evidence improves decision making, he said, and at the U of S, "through our planning processes … we are better able to build on strengths and address weaknesses."

Governance, he continues is a second strength among universities. "These are big, complicated, important institutions … (that) need to conduct their affairs and spend their money in ways that are internally coherent and externally acceptable and compelling." In his first 20 years at the U of S, MacKinnon said he viewed its governance as weak, a situation turned around with a legislation that created Council and re-allocated governance authority between that body and Senate. A new protocol for the appointment of public representative to the Board of Governors also improved the situation, but "governance takes constant vigilance."

A third strength is recognition that in the post-industrial knowledge-based era, universities are of central importance. The convergence of the ambitions of key stakeholders – governments, the public and the institutions themselves – means thinking about networks, collaborations and flexible roles, he said. MacKinnon cited a number of examples of this new reality at the U of S, adding "our success in the years to come will require openness and adaptability to organizational and behavioural change."

Turning to his three big questions, the president first queried the impact of technology on the university's activities, wondering if technology is being fitted into traditional ways of doing things "or are we using technology to challenge traditional ways and perhaps develop new ones?" He admitted he does not have the answer but suggested much more attention should be paid to this question.

Who pays was MacKinnon's second question, referring to the balance between public and private support for post-secondary education. With the benefits of university education going to both society and individuals, "there is no simple or lasting answer. What we can hope for and expect is that (the question) will be answered thoughtfully in a manner that respects the prerogatives of both governments and universities."

His final question asked if universities will lead in finding solutions to the pressing issues of the day, "and if not universities then who, or what?" A growing world population, food security, water safety were among the social-political and environmental stresses "our space ship Earth is under … stresses that can be expected to increase." Here, the University of Saskatchewan is well positioned to be a leader, MacKinnon said.

Pointing to the university's proud history in the development of Saskatchewan's agriculture industry, MacKinnon said taking on the pressing issues has been the institution's approach since it was founded.

"Whether it is agriculture or health care, our university comes naturally to its civic responsibly to be engaged in addressing the great challenges of our era. It is in our university's DNA."

MacKinnon concluded his address by saying his views on the growing strengths of post-secondary institutions and the big questions those institutions must consider are informed by his 13 years in the office of president. He added he is grateful to have served in that capacity, "and how grateful I am for the guidance, advice and support I have received from so many in this great hall today."