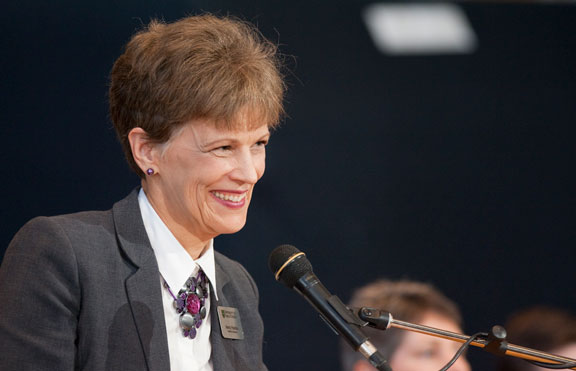 Promise and Potential: The Third Integrated Plan 2012-2016 was endorsed by the board at its meeting March 6 following a similar vote by Council March 1. At the board's annual reporting session following the meeting, Fairbairn told an audience in Convocation Hall that it is not the plan itself that will make the difference for the University of Saskatchewan but rather "the actions that we take as a result of our plans."

Board Chair Nancy Hopkins said the plan, which details priorities and directions for the institution, "is in and of itself a strategic advantage for this university."

In a brief presentation, Fairbairn outlined the consultations that began in the fall of 2010 as the third plan took shape. He pointed out its development was guided by the university's strategic directions and foundational documents, and built on the accomplishments of the previous two plans. "The task now," he said, "is to interpret our university's enduring priorities over the next period of time and decide what they mean for us in 2012-16."

The plan contains four areas of focus—knowledge creation, Aboriginal engagement, culture and community, and innovation in academic programs and services—that include 12 commitments, each of which is accompanied by a strategy, actions and measurements to gauge success. The areas of focus are also reflected in the individual planning parameters set out in each of the university's colleges and units.

In addition to driving the university's academic and administrative agendas, Hopkins said it also influences board decisions and priorities. Just as previous plans "are always in the back of our minds, and on the front of the pages that come to us for our consideration, the same will be true as we move forward with the third integrated plan. As the board reviews matters that will come before us over the next four years, it will do so in the context of the plan."

Hopkins pointed out that in the previous planning cycle, with its emphasis on areas like the student experience and enhancing the university's national and international research profile,  the board was prepared "to assume the risk of moving forward" with projects like the Gordon Oaks-Red Bear Student Centre and the Canada Excellence Research Chair in Water Security. In the coming four years, "the kind of questions the board will be asking as it reviews new proposals are, ‘how does this proposal resonate with the goals and priorities articulated in the third integrated plan?' or ‘what are the possible consequences for us if we do this, or don't do this?', and ‘are the risks involved outweighed by the benefits?'."

She went on to say that without "a robust and well-respected planning process among our sister institutions across the country," the U of S would not likely have attracted the quality of candidates it did in the recent search for a new president. And hiring the president, Hopkins said, is arguably the single most important job of the Board of Governors. Ilene Busch-Vishniac, who takes over as president July 1, has reviewed various drafts of the plan, said Hopkins, and provided "personal and strategic feedback" that is reflected in the final version. That involvement will help ensure a smooth presidential transition and that "the board and the president are aligned in our focus."

The integrated plan, she concluded, "is hugely important to the institution from many perspectives."

In addition to defining priorities, Fairbairn said the plan serves to guide the university's investments of time, energy and resources. So, as in previous planning cycles, the new plan is accompanied by two additional documents. One is the multi-year capital plan that aligns academic priorities with capital planning and management. It lists the university's capital priorities for the coming four years as the infrastructure renewal and revitalization program called RenewUS; strategic capital projects; innovative use of the university land base; and support for growing distance education and distributive learning programs.

The second accompanying document, the multi-year budget framework, projects revenues and expenses over the four-year planning cycle. Fairbairn pointed out that "much of the picture remains unclear," particularly around the provincial government grant, but the university has identified particular financial pressures. These include a highly competitive hiring strategy, pensions and deferred maintenance issue on infrastructure.

"We are mindful of those pressures," he said. "We can see that over the next four years, if we took no action, those kinds of pressures would cause our expenditures to grow more quickly than our revenues. That's not going to happen of course, because we will not let it happen."

Speaking after the presentations, Fairbairn stressed that the document is not a budget but rather a framework based on "reasonable assumptions." That framework identifies accumulating deficits that will require work on both the revenue and the expense side, he said, "but we've done this before, and we've done it while continuing to invest in our priorities."

The financial framework will be a topic of discussion for Council and at an April 3  campus town hall meeting.

In concluding his presentation to the meeting, Fairbairn said it is important to see the new integrated plan as a group effort, "not the work of one set of hands or one mind but of many hands and many minds. It is our plan." And the difference it will make will not be felt just on campus; the third integrated plan will mean "society will be better served by our university in Saskatchewan and far beyond. Students, communities and the public are going to be the beneficiaries of the work we do."

Promise and Potential: The Third Integrated Plan 2012-2016 as well as the capital plan and budget framework can be viewed on the U of S website.