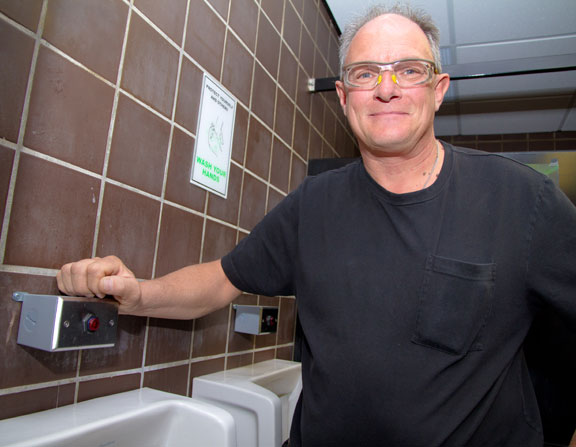 Gordon Poole, electrician in the Facilities Management Division, invented the water-saving device that will convert traditional water-wasting urinals into more efficient appliances that will drastically reduce the amount of water used.

When he was coming up with the idea a few years ago, Poole set up monitoring devices in a test bathroom in the University Services Building to see how much water the old-style urinals used, and he said that above every set of urinals, a 10-litre tank fills with water every four minutes and 20 seconds and then completely drains. Although the tanks are not visible, the filling and draining happens all day, every day.

"That's a lot of water down the drain," said Poole. "I think when these old urinals were installed there was a concern about the smell and plumbers were not as concerned with water conservation … today, we know how important saving water is."

Poole realized he could use programmable logic control (PLC) devices to set up sensors above the urinals so that water only flushes when the urinal is in use. After trying out his new system on a two-urinal men's bathroom, 8,600 L of water were saved in about 60 days.

He named his invention Gord's Eco Pee and it wasn't long before he had the green light to begin installing sensors on campus.

The Education Building was the first sight to see the installation of Gord's Eco Pee and retrofit sensors can be seen above the urinals. The PLC device is housed in a central boiler room in the building and controls seven men's bathrooms with about 20 urinals in the building. The sensors must be activated for at least six seconds before a flush cycle is initiated.

Poole also programmed the PLC to initiate one final flush for the day at midnight as most of the bathrooms go unused during the night.

"I'm really looking forward to seeing the numbers of litres of water we save on this project," said Poole. "In hindsight, we were trying to save water, but this device will save money, cut down on maintenance costs and will prevent flooding."

Poole said he has been programming PLC devices for years for other purposes like automatic wheelchair doors, emergency lights and dozens of other projects. But the eco pee might be his most automated and proudest invention yet.

"I haven't run across anything these devices can't do," he said. "They're only limited by my brain capacity."ν