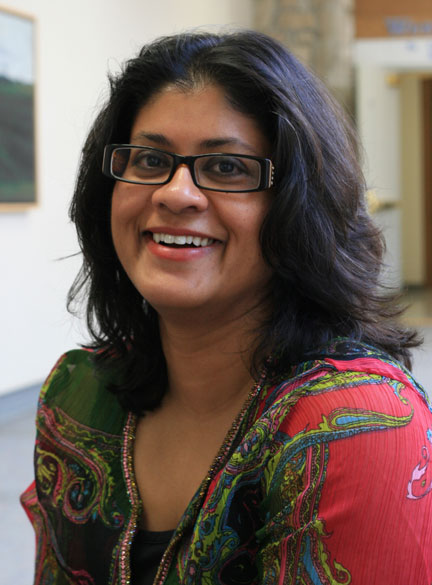 Details of the budget were released May 16 at a town hall meeting held to discuss the university's current and long-term financial situation, including a projected annual operating deficit of about $44.5 million by 2016. In light of the larger deficit situation, university administrators will not be taking any drastic action to address the 2012-13 shortfall, according to Piya Sen, director of budget and special projects in the Financial Services Division.

"I don't want to be flippant because $6 million is a big number, but it's not as big as $44.5 million. We will continue to look for one-time savings that will eliminate this year's deficit but we don't want to make reductions this year that turn out to not be the right actions to address our long-term deficit situation."

Sen went on to say that some one-time and permanent reductions were made during preparation of 2012-13 detailed budget to bring the deficit down to the $6 million. These included cancellation of a planned two-percent increase to colleges and units for non-salary expenses, a more detailed analysis of actual salary and benefit expenses, and deferral of an anticipated operating budget contribution to RenewUS, the program that will see revitalization of campus infrastructure based on academic priorities.

Total revenue in 2012-13 is expected to be $447 million, with 68 per cent coming from the provincial operating grant, 23 per cent from tuition and fees, five per cent from other government sources including operating funding for InterVac, and four per cent from university investments. The budget anticipates about $11.5 million in investment income, up significantly from last year's budget but about on par with actual returns last year. Sen said this year's budget figure "is more reflective of the actuals we've experienced."

In fact, higher-than-anticipated returns on the bond market are expected to push the university into a surplus position for 2011-12. Sen said that surplus, which has yet to be finalized, will be used to reduce the funding shortfall on the Gordon Oakes-Red Bear Student Centre, to fund upcoming budget adjustments and to raise the university's general operating reserves. Board policy dictates that operating reserves be maintained between one and four per cent of operating expenses, "and we want to be on the higher end in these challenging times. It gives us a bit of a buffer."

On the expenses side of the budget, salaries and benefits are expected to rise in 2012-13 to $299 million or about 67 per cent of total operating costs for the university.

Another large expense, about four per cent of the total, is utilities but in 2012-13, those costs are expected to drop to about $19.4 million from about $20 million last year. Sen said the budget "reflects both projected consumption and what we know about our locked-in rates." This category of expenses includes electricity, natural gas, water, telephone, hardware and network maintenance, and software licenses.

One challenge in preparing the budget was finding money for operating the Health Sciences D Wing. The university had asked the provincial government for $3 million to cover those costs but that was not forthcoming in the March provincial budget. Sen said the projected cost for 2012-13 has been reduced to $1.7 million by phasing in custodial and maintenance services, and discussion are continuing with the government about future funding needs.

The 2012-13 budget also includes expenditures of $9.6 million for central scholarship and bursary funding, $9.6 million for library acquisitions, $7.1 million for the academic priorities fund and $13.2 million in student-related enhancements which will come from tuition revenue.