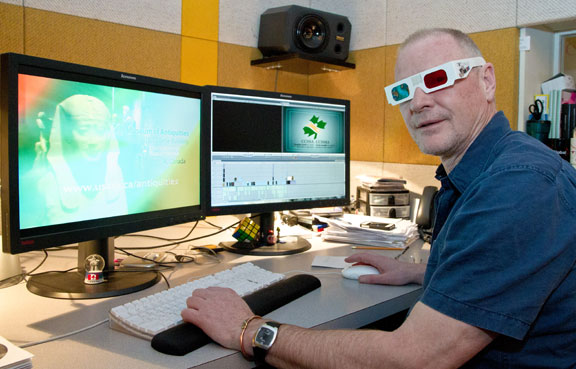 "It's an interesting phenomena right now," said Nixon, a filmmaker and documentary project manager with Media Access and Production (eMAP) at the University of Saskatchewan. "There are a lot of 3-D movies coming out in the entertainment industry, but the real value in the technology, I think, is in education."

Nixon imagines filming a 3-D video a surgery or dissection for anatomy classes. Students watching the video could truly grasp the depth of the incision, or the position of the bone and muscle fibres. The feeling, said Nixon, would be like "being there."

3-D is also a great way to show a space or building, and Nixon and his colleagues have created a video tour of the Museum of Antiquities in the College Building. The video is posted on YouTube and can be viewed in both 3-D and regular viewing formats.

While watching the video without the proper eyewear is a bit difficult, a pair of red and blue lens glasses is all that is needed to view 3-D videos on YouTube.

"The technology has gone much further that the old school blue and red glasses, but there is a real value there compared to some of the alternatives."

Panasonic, the current industry leader in accessible 3-D technology, creates televisions to work in synch with special LCD glasses that cost around $300, said Nixon. Other companies like Sharp are claiming they are close to mass production of 3-D televisions that can be viewed without any glasses.

The technology for 3-D films has been around since early in the 20th century, he said, but only recently has it been available for home or school use. The cost is still a barrier, according to Nixon; a 3-D camera for day-to-day use on campus carries a price tag of about $30,000.

Panasonic, he says, lent the U of S the 3-D camera used to shoot the video for the Museum of Antiquities and in return, the company is using the U of S video in their promotional material.

"It is a real challenge filming in 3-D but I welcome the opportunity," said Nixon. "It's a different way of thinking about shooting … changing your direction, your point of focus … but it was fun to explore."

Nixon thinks it will only be a matter of time before professors are teaching classes around the world using holographic images. The thing is, "that technology is already there …"