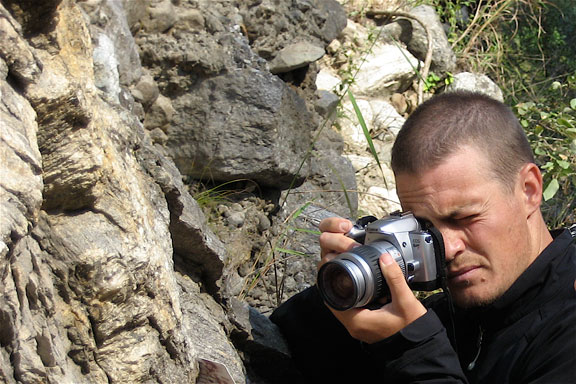 The assistant professor in the Department of Geological Sciences is using a unique crowd sourcing websiteâ€”Petridish.orgâ€”to raise additional funds for his project, and at the same time raise the profile of the science that goes into understanding how the Himalaya Mountains came to be. Through Petridish, Larson is seeking $3,500 "from everyday people interested in science" to expand the scope of the work he will be able to do in Nepal.

Larson first learned about Petridish.org through social media, he said. The site allows researchers to raise up to $10,000 for a particular project from people interested either in the researcher or the area of science. Project proposals, including videos, are posted on the site giving the public the chance, according to the website, to "get involved first hand with research projects that are changing our world."

The same day he heard about the site, Larson said he went online to learn more and the next day, wrote up his proposal called Raising the Roof of the World. In it, he explains the two models for mountain building and how knowing the temperature and pressure conditions of the rocks will help clarify scientific thinking about what happens to the Earth's crust when tectonic plates collide.

Most of what he wants to accomplish in Nepal will be covered by a Natural Sciences and Engineering Research Council of Canada grant "but in this granting climate, everybody gets a little bit and base funding is never enough to do everything you want to do." In addition to collecting samples to determine the temperatures and pressures the Himalaya rocks have been under, Larson wants to add the critical element of time to round out the picture. The $3,500 he is seeking on Petridish.org will allow him to do radiometric isotopic analyses of eight specimens to understand when the rocks reached those various temperatures and pressures.

The rules of Petridish are that if Larson does not attract the full $3,500 he is requesting, "nobody pays, but if you get more, it's great because we'll be able to analyze more samples." Petridish takes five per cent of the total raised for each successful project to cover its operating costs.

Much of the appeal of using the new website for Larson is expanding the public's understanding of the role geology plays in everyday life. "Here in Saskatchewan, large parts of our economy, particularly mining, are based on geology and as geologists, we haven't done a very good job relaying that to the public."

Larson is using Twitter to promote not only his own project but the novel concept of Petridish itself. "I'm trying to really push people to Petridish to get as many eyes on it as possible."