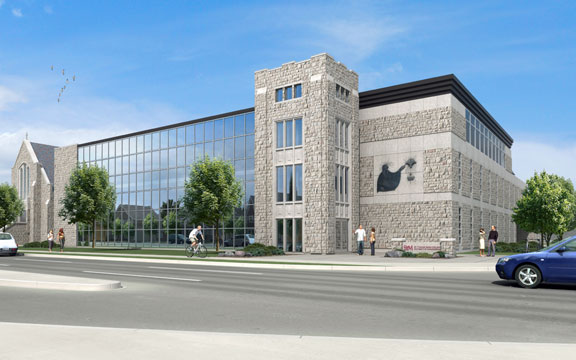 Tenders will go out soon for a three-storey building right along College Drive that will be linked to the existing east wing of the college. Construction is expected to begin in June, said Derrin Raffey, chief financial officer and director of administration for STM, with completion of the estimated $8-million project anticipated for August 2013.

Raffey said the addition, which will include classrooms, study space, offices and research space, is largely oriented toward students. Current space shortages mean STM students can take only about 40-50 per cent of their classes in the college; the rest are spread out across campus. "That's not necessarily a bad thing," he added, "but we lose recognition, engagements with out students. And if a student truly wants a faith-based post-secondary education and we place them in a secular classroom, they might have concerns about raising faith-based questions."

The goal, he stressed, is not to accommodate all classes for all STM students—"we believe there's value in our students taking some liberal arts classes across campus"—but rather to increase to about 75 per cent the number of classes available in the building.

A second focus for the project is to provide social and study space for students, amenities that are lacking in the current building. The addition includes about 100 sq. m of common area and break-out room for student use, "a place to study and engage in college life," said Raffey. The new building will also allow the college to reconfigure existing space to be more student friendly, he said. That includes changes like providing private offices for advisors and campus ministry.

The addition will also address some access issues. There is no elevator in the current building that provides access to all five floors, a situation that will be rectified in the expansion.

With the 800 sq. m addition, STM will also be able to help the university address some critical space shortages across campus. Raffey mentioned in particular 80-100-seat classrooms. The two planned for the new building "are going to double the number of classrooms that size for the university." As is the current case, priority in scheduling is given to STM but when not in use, all the college's classrooms are made available to the campus community.

"An STM student is a university student," Raffey said. "We're all in this together."

The existing building was officially opened in 1957, a replacement for the college's original wooden structure, and two further expansions were done in the 1960s. STM has a long-term lease with the university for the land it occupies on campus.

The new addition will incorporate the Collegiate Gothic style of architecture, fieldstone and glass creating strong visual ties to campus and particularly to the new Health Sciences building down the street.

Raffey said STM has been planning financially for this project for about 15 years and will also be seeking funding from other sources, one being a capital campaign set to launch this spring. While the U of S will not be involved financially, Raffey said its board has been kept updated on the project and is supportive, a testament to the strong federation relationship between the two institutions.

"It's a very exciting time for us," he said, "not only because we've got the support of the university but also because we'll be able to contribute our share to the student experience on campus." ν