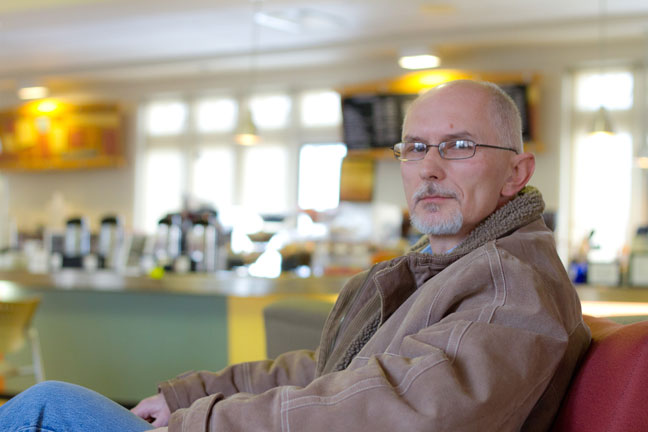 It was 1995, and Klobucar, with his six-year old son and elderly parents, left war-torn Croatia. "It was war. We saw our land, our roots, everything was destroyed," said Klobucar of his hometown Petrinja. "I spent five years as a refugee in Montenegro, Serbia and then Belgrade before coming to Canada in February of 2000."

Klobucar's mother was born in Canada and had a sister living in Saskatoon who helped the family settle in. It was a long way from the banks of the Kupa River where he grew up and became an established writer whose poems were included in the Anthology of Serbian Poetry of the 20th century in Croatia.  But when he arrived in Saskatoon needing work, Klobucar's "first choice was any job to support my parents and son." He took a job in private security, something he was assigned by the Canadian Embassy "because everyone in the former Yugoslavia goes into the military, so my first job in Saskatoon was security."

In 2003, Klobucar—the author of nine books of poetry both in English and Serbian—landed a job at the U of S as a parking enforcement officer and was starting to find peace with his new life in Canada. "Saskatoon reminded me of home in a lot of ways. Not too big or too small and the river reminds me of home. I love walking on the river, wherever I move there is always a river."

The campus, located on the banks of the South Saskatchewan River, was a near-perfect landing place to find inspiration for his writing. "The university, the nature of campus and the museums, all on the river, I find peace there, and am able to continue writing and supporting my family."

Klobucar does a lot of writing on campus in his spare time—both in and out of uniform—and has finished a new book of poetry that he is looking to get published. "People see my uniform and what I do as a job, but that's not me. What I do and what I wear isn't important to who I am. I was a poet before I was born—how I see and hear things and how I capture those moments is what has bearing on who I am. That's what tells you about me."

Klobucar's path has been long and winding, but has led him to a place of contentedness, a place he has once again found peace. "I followed many paths in life, some intentional and planned, and some forced upon me. I was doing many things in life and couldn't get satisfaction or peace. I needed to stop, open my eyes and listen to what was around me. Once I did that I discovered who I am. I was never fully happy and never at peace until I started spending time by the river and writing my thoughts. There are no accidents in this world; everything happens with perfect purpose. It might take a few years but eventually the purpose will be clear."

that I listened to long ago—

The murmur has gone

There are no banks

to wash over my body.

All is now wrapped in silence…