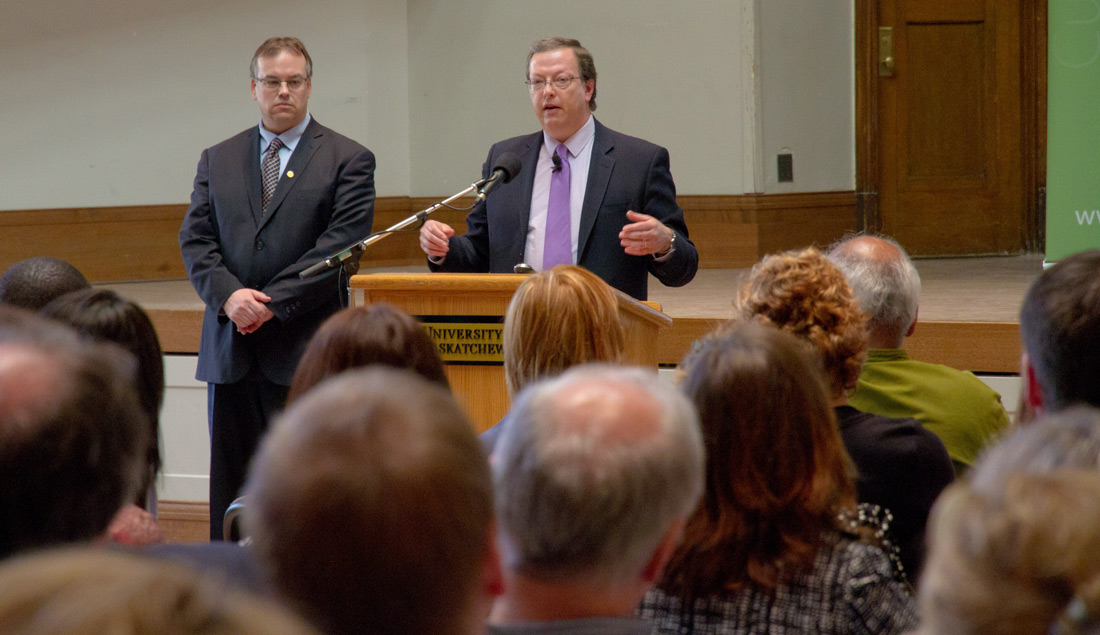 At a town hall meeting May 16 to outline how the institution plans to adjust its operating budget between now and 2015-16, Provost Brett Fairbairn said the reality is that "attempting to be everything to everyone … that doing so much in the ways in which we've been doing them may no longer be financially sustainable. We have to prioritize more clearly. We will need to focus on doing what we do well, and not always on doing it all."

A downward trend in funding for post-secondary education across the country, rising compensation costs, increasing pension payments and the expense of operating and maintaining campus buildings have all combined to put pressure on the university's operating budget, explained Fairbairn. The change necessary to bring expenses in line with revenues will require a level of change "most of us have not experienced in recent memory at this university."

To provide perspective on the magnitude of the challenge, Fairbairn said that by 2015-16, the projected $44.5 million deficit will represent about 8.5 per cent of the university's operating budget, a number that is greater than the annual funding allocation to all but its two largest colleges. "There is no one action that will solve an issue of that magnitude," he continued. "We're going to be thinking about budget adjustments that make sense … not simply what we can do most quickly."

Before describing the budget adjustment strategy university administrators and the Board of Governors have put in place, the provost acknowledged that difficult choices will have to be made over the next few years, and that it will be a time of uncertainty, but fundamental change is necessary to ensure the university achieves its goals.

The approach the university will take to narrowing the gap between expenses and revenues will be deliberate and measured, multi-pronged and research based, he said, adding decisions will be "guided by evidence and by examples of what people have done in other universities." The goal is to find solutions that are both long term and sustainable.

After Greg Fowler, acting vice-president of finance and resources, provided information about $6 million deficit in the 2012-13 detailed operating budget (please see budget story Page 8), Fairbairn highlighted the principles that will govern the budget adjustment process. These include alignment with the priorities outlined in the university's third integrated plan, taking a holistic view of the university and its resources, and following a transparent and collaborative process.

He also spoke about the university's strengths going into budget adjustments: a surplus from the 2011-12 fiscal year and operating reserves that will provide transition and one-time funding; clear institutional priorities; and ideas and people. "We will need many hands and many minds to address the kinds of issues we will have in the coming years."

The reduction target of $44.5 million "is going to have to be achieved in chunks" with permanent annual reductions of $9 million to $13.5 million annually through to 2016, amounts Fairbairn described as "manageable." A number of work teams, overseen by a steering committee, will be set up to examine administrative and academic expenditures that occur both centrally and across the university. "It is unlikely," added the provost, "these types of targets will be met by focusing on administrative actions solely.

"It is clear no one group of people is going to solve the problems of the magnitude we're looking at here today. It will take the collective effort of everybody to make this process successful."

Fairbairn said the Service and Process Enhancement Project (SPEP) is one example of work already underway to find savings and efficiencies on the administrative side. On the academic side, he said the university could, for example, see changes to the programs and courses it offers, and the modes and methods of delivery.

Fairbairn stressed that change on these various fronts will take place at different rates. Administrative measures will likely be the quickest to develop and implement while academic change could take years.

Describing the governance structure of the process, the provost said the Board of Governors provides overall direction but approval of all budget adjustments will rest with the Provost's Committee on Integrated Planning. That committee will also provide direction to the steering committee overseeing the work teams. And he encouraged the campus community to continue to provide cost-saving ideas.

Next steps include appointing steering committee and work team members, he said, and dealing with the $6 million deficit in the 2012-13 operating budget. Research will continue on best practice for budget adjustments, and Fairbairn assured the audience that regular updates on progress will be provided to the campus community.

The effort to avoid a $44.5 million annual deficit will mean change for the University of Saskatchewan, said the provost, "but our mission and our ambitions as a university remain the same. We may not any longer be able to try to be everything to everyone but by strengthening our focus, we will become stronger in areas we've identified as most important."

More information and a video of the May 16 town hall presentation can be found at usask.ca/finances