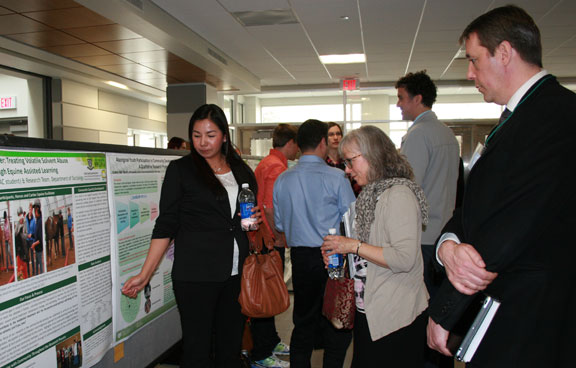 "Success on the campus must be shared with those off campus," said U of S President Ilene Busch-Vishniac in opening the event.

She explained the university has many community partners, from government and advocacy groups to industry and some of the most marginalized voices in society. All want the university to "contribute meaningfully to their goals."

"Partnering and engagement provide one important means of responding to these calls, and answering them in a manner that is academically rigorous."

For the U of S, engagement offers new research and learning opportunities for both faculty and students, explained Keith Carlson, history professor and a leader of the engagement renewal in his role as special advisor to the VP advancement on outreach and engagement.

Carlson announced a new funding package worth $175,000 annually to support faculty and graduate student efforts to work with communities across the province and around the world. The money will fund research grants and awards, a doctoral fellowship, community-engaged teaching activities and an annual symposium on engaged scholarship.

Some elements are unique, such as The Engaged Scholar, a new academic journal, and a grants program to provide resources for faculty members to sponsor and co-author papers with graduate students, Carlson explained. Other initiatives include a seed funding program to help leverage other grants, as well as a K-12 outreach program to inspire students to pursue a university education. A new website has also been launched at usask.ca/engagement.

Carlson said one of the founding principles of the U of S was to bring the university to the people. This has manifested itself over the years in early programs like the Better Farming train that travelled the province from 1914-1922. He also cited more recent examples like the Centre for Study of Cooperatives and the Saskatchewan Population Health and Evaluation Research Unit.

Carlson described outreach and engagement as two overlapping terms that sometimes need to be viewed separately. Outreach, if done as a one-way push to audiences, runs the risk of creating problems even as it tries to provide solutions.

"Outreach that is not based on strong partnerships, that is outreach that did not involve the affected communities … ran the risk of having goals that were misaligned with the desired outcomes."

He cites the Green Revolution as an example: while new crop varieties and production methods made it possible for developing countries to grow far more food, it also made it necessary for farmers to use commercial fertilizers and crop protection products and disrupted local economies.

In the past 40 years, Carlson said there has been a shift to embrace the engagement model, citing U of S examples like the Community-University Institute for Social Research. Other examples from the Colleges of Engineering, Law and Medicine underlined his point.

That said, he acknowledged barriers. Some disciplines, having paid their dues and won the trust of communities through long effort, are reluctant to collaborate. Other concerns such as those surrounding tenure and advancement are more immediate.

For example, engaged research produces both process and results, but results are what need to get published. Carlson said it demands a strategic approach. Also, as research has gathered momentum, the research and scholarly publishing industry has begun to react.

"We're seeing the rise of new journals that publish on the process, but we're also seeing older disciplinary and interdisciplinary journals be much more open to that cross-pollination."

Carlson said the benefits of engaged scholarship are, in the end, too great to ignore, offering benefits to communities, researchers and their students.

"I think there's a lot of potential here, and it's a way for us to distinguish what we do to attract students. You can come here, and we can guarantee that you're going to experience something that sets this campus apart."