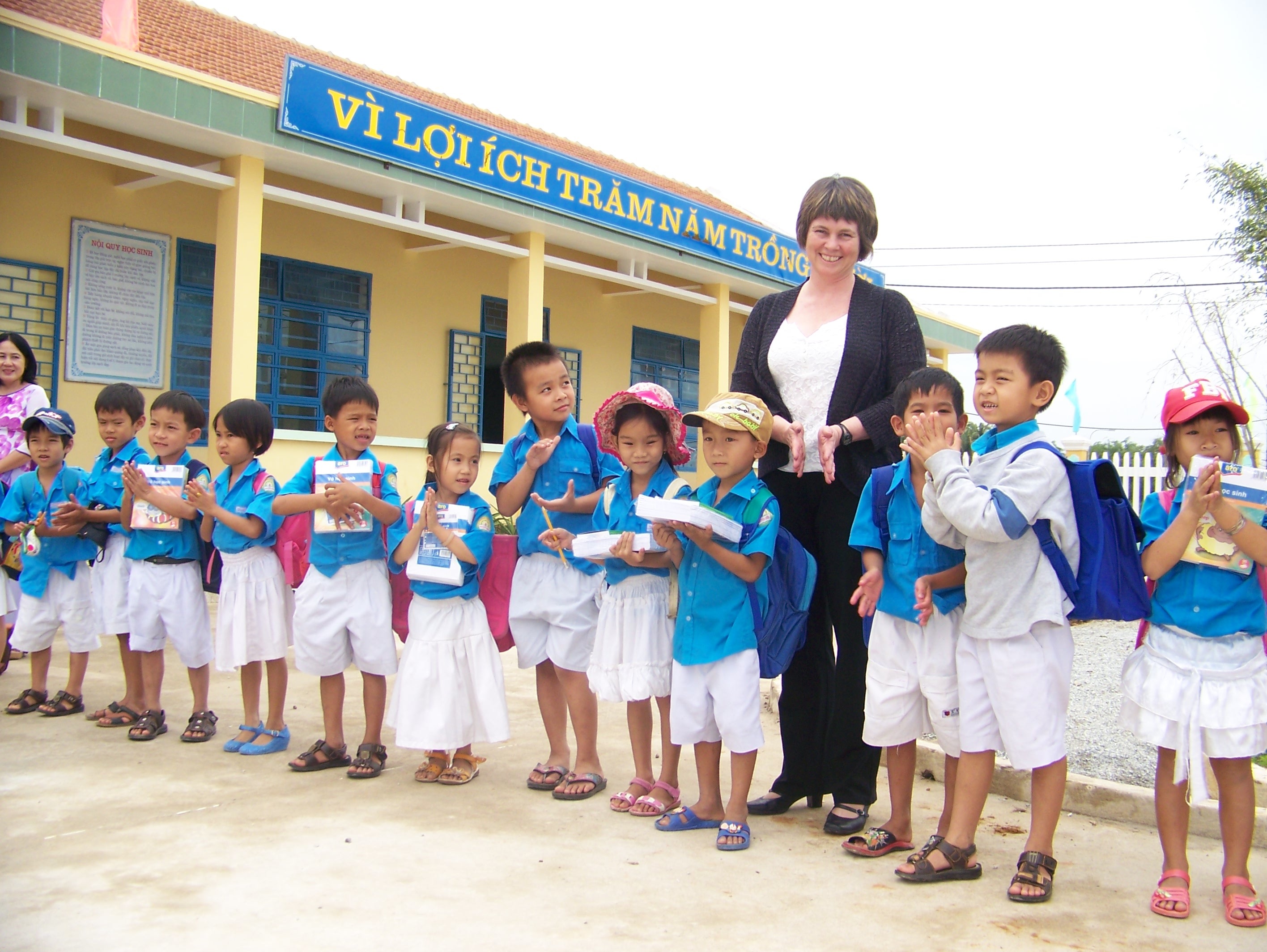 "We spent a lot of time in rural areas and were moved by the poverty that we saw," explained Holroyd, a professor of political studies.

In 2005, Holroyd returned to Vietnam and met with government officials in Hana's home province of Thai Nguyen to discuss how she could help. "They desperately needed classrooms. The schools were built a long time ago or were constructed from poor materials. They were falling apart."

So Holroyd created the Vietnam Education Society (VES) to raise money to build new schools in rural Vietnam. The charity has raised more than $250,000 since 2005 and has funded the construction of a 10-room primary school, a multi-purpose community building, two early childhood development centres, a three-room primary school and a five-room primary school.

"We have gone back several times and have seen the difference new facilities make," said Holroyd. "Better schools bring better teachers. In Cát Nê, home to the new 10-room school, multi-purpose room and one of the early childhood education centres, the government subsequently built a health centre and paved the main road. A grocery store and gas station followed. The school transformed a community that had previously received very little in the way
of government-funded infrastructure."

There are many people in Vietnam in significant need and "a little support can make a big difference. We asked a principal of a VES early childhood education centre how else we could help and she asked if we could pay for blankets and lunches. She told a story of a three-year old who walked two kilometres to school everyday and only had half a sweet potato to eat."

Holroyd and Coates, a Canada Research Chair in Regional Innovation at the U of S,
took Hana back to visit in 2010 and "she was head and shoulders taller than children her age there.  You really see the difference nutrition makes." After that visit, Hana decided to donate her birthday money to VES.

More recently, the VES responded to a request to support a scholarship program aimed at young girls at risk of human trafficking, a major problem in Vietnam's border provinces.  Holroyd agreed to fund 50 scholarships and a three-day summer camp that teaches life skills and educates girls about the risks of trafficking.

"Young girls in Vietnam have a lot of pressure to make money and help support the family. The scholarships are aimed at keeping at risk girls in school by covering their school fees, books, extra tutoring and bicycles for getting to school. It ensures that going to school doesn't cost the family money," Holroyd said.

Keeping the girls in school is a big part of keeping them safe and is also chance to educate them about the dangers of trafficking. "But just as significant, it shows that someone cares about them and wants them to get an education. The idea that someone on the other side of the world is cheering for them must be a good feeling."

When people donate to VES, Holroyd ensures that 100 per cent of the money goes to the cause; she and her family covers all administrative costs. Holroyd said that a lot of support comes from family and friends, as well as other families who have adopted children from Vietnam. Additionally, VES has received significant support from Rotary Clubs in Canada as well as Vietnam-based partner East Meets West

"It is overwhelming to see how much need there is in the world. VES works in just one part of one country. The more you look the more need you see and that is tough," said Holroyd.  "But one has to start somewhere. By improving educational opportunities for children in rural Vietnam, we are helping them build a better future individually and collectively."