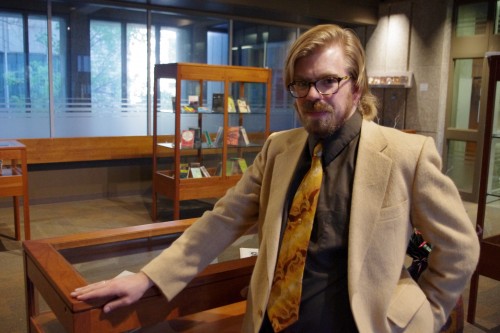 QueerUS: Language, Space and the U ofÂ S showcases about 120 works including books, magazines, newsletters, political pamphlets, movie posters and postcards. On view in the Murray Library Link Gallery, the exhibition runs until Dec. 20.

"This is about language," said Joel Fonstad, lead curator of the exhibition and a member of the Provost's Advisory Committee on Gender and Sexual Diversity. "Each piece represents a view of queer culture at a given time. We were hoping to collect all of the perspectives to show different ways and shifting ways that queer individuals have been viewed by others or marketed to within the last 100 years or so."

The items on display indicate an ebb and flow, said Fonstad, co-ordinator of the Academic Transition and First- Year Enrichment Programs at the University Learning Centre.

Items from the 1920s show those years were a more open time for queer people, but the amount of material published in the 1940s was more limited, perhaps because of the war effort during those years.

"The conservatism of the 1950s really clamped down on the freedoms of sexuality and gender presentation," he said, adding that the 1960s and 1970s were years of increased openness.

"There was a blip in the â€˜80s because of the AIDS crisis. It created a culture of fear. Since then, things have been progressively getting more and more open."

Not only did the amount of material produced vary over the years, the messages in that material have been mixed.

"Some of the perspectives in the exhibition are positive and some are negative."

Fonstad points to one of the showcases with three books arranged on a shelf. The first, published in 1968, is called Growing Up Straight: What Every Thoughtful Parent Should Know About Homosexuality.

"It's a guidebook to help parents make sure their children grow up straight. It's incredibly homophobic. I enjoy watching the shift between that and the next two."

A Stranger in the Family: How to Cope if Your Child is Gay from the early 1990s labels the child as a "stranger." Fonstad also noted the use of the word "cope." The title of the third book, published in 2000, So Your Child is Gay: A Guide for Canadian Families and Friends, has a ring of resignation to it, he said.

Some of the items on display have direct ties to the University of Saskatchewan. A 1930s edition of the university yearbook called The Greystone includes photographs of men and women crossdressing. A copy of Oscar Wilde's De Profundis, his letter from jail to his male lover who allowed him to be put in jail for being homosexual, contains the only known examples of U of S library checkout cards.

"If you look at the dates on the cards, it tracks that trend that I was talking about. It was checked out somewhat frequently in the â€˜20s, trailed off a little in the â€˜30s and into the â€˜40s. It skipped the â€˜50s altogether and picked up again in the â€˜60s."

Fonstad and assistant curators Martin Winquist and Elana Gellar sorted through thousands of pieces before deciding on the 120 items on display. Many are from the Neil Richards Collection of Sexual and Gender Diversity; others were chosen from various collections at University Archives and Special Collections.