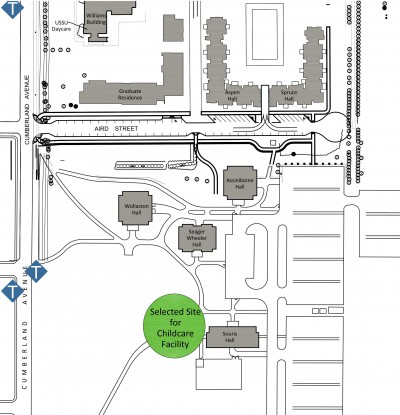 At its meeting March 5, the Board of Governors gave initial approval to a plan to build a 90-space child-care centre in College Quarter. The building, said David Hannah, associate vice-president for student services, will be located south of the Williams Building and west of Souris Hall. Board approval will now move the project from the preliminary schematic design stage to detailed design and tender.

While the 90 new spaces will not address all of the pressure for child care on campus, "for students with families and particularly for single parents, this might make the difference between going to university or not," said Hannah.

Ideas for upping the number of child-care spaces by 110 have been under discussion for some time. An initial proposal was to expand the existing child-care centre in the Education Building to 88 spaces and build a new facility to handle the difference, said Hannah, but bringing the Education Building facility up to new provincial standards for child care plus expanding within the building proved to be prohibitively expensive.

The decision was made about a year ago to abandon the two-facility approach and move to a single new building, even though regulations limit the number of spaces in a single centre to 90, 20 short of the 110-space goal, he said. And even that goal is modest; Hannah pointed to a January 2011 survey that indicated the demand for child-care spaces exceeds 800.

The proposal that went to the board would see a one-storey building in College Quarter that would have a small number of spaces for infants and toddlers. The majority of the spaces would be reserved for children ranging from 30 months to kindergarten age. The plan also includes a large outdoor play area. There has not been a final decision made on how the spaces would be allocated, but Hannah expects about 75 per cent would be reserved for students and about 25 per cent for university employees.

He said the cost of the building has yet to be determined "but the board wants to have an assurance that funding is in place before this project proceeds." The university has already received about $1.4 million from the Ministry of Education, which oversees child care in the province, and Hannah said the remainder of the cost is expected to be covered by a proposed student fee, a contribution from the university and fundraising.

He added that the university does not intend to operate the child-care centre. Instead, it will provide the space at a nominal cost to an independent operator, "and our hope is to ask the USSU child-care centre in the Williams Building to operate this facility." That organization has proximity to the new building, experience and infrastructure, making it a good candidate to for the job, "but that still has to be worked out."

With the addition of 90 more spaces, the U of S would move to about "the middle of pack" among Canadian universities when it comes to the number of spaces per student population, he said. "This is really essential to improving accessibility to our university. That's why there is such focus on meeting this need among our students."

A detailed proposal for the child-care building is expected to be on the Board of Governors' agenda later this year. The construction start date is set for February 2014, which would see the facility ready to receive its first children in the fall of 2015.