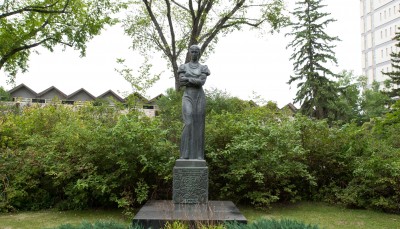 The sixteen-foot bronze statue of Lesya Ukrainka (1871-1913), who is a celebrated Ukrainian literary figure, An initial rending of the Lesya Ukrainka Garden outside the main entrance of the Murray Library, currently sits in a quiet grove just south of the Arts Tower and was unveiled at the U of S in 1976 amid celebration and controversy. Commissioned by the Association for Cultural Relations of the USSR, the statue was seen by some at the time as an attempt to justify and dignify injustices perpetrated by the Soviets against the people of Ukraine.

"She was an early feminist, and was concerned in her works with the role of women in family and society," said Victor Buyniak, former head of the Department of Slavic Studies at the U of S. "Today, however, the statue's an important marker of Ukrainian heritage and culture on our campus."

Buyniak's interest in the statue was re-kindled when it was suggested it might have to be relocated to accommodate construction of the Gordon Oakes-Red Bear Student Center nearby. But through donations from Buyniak and the Winnipeg-based Shevchenko Foundation, and an endorsement from the Ukrainian Canadian Congress, the University Library has been able to begin exploring the possibility of establishing, a permanent outdoor space that would have at its center the Lesya Ukrainka statue.

In the Lesya Ukrainka Garden, proposed for outside the library's main entrance facing the Arts Tower, the campus and wider communities could gather and learn more about Ukrainian culture and history.

"We're extremely excited about the transformational nature of this project," said University Library Dean Vicki Williamson. "The garden will not only create a beautiful new outdoor space, but it will dramatically re-configure the front entrance of the Murray Library in a way that's consistent with the kind of transformation that's taking place in the learning spaces throughout the University Library."

The timeline for the completion of the project, which would also see the statue professionally conserved, is ambitious. The University Library aims to open and dedicate the garden on Aug. 1—the centenary of the death of Ukrainka. Despite the fact that the $300,000 required to complete the project has yet to be fully secured, the library is optimistic that the initiative will be widely supported.

"Lesya Ukrainka was a poet and a significant literary figure, and her association with the University Library is a natural one," explained Williamson. "It will be through the commitment and vision of more donors like Victor that the University Library will be able to preserve this important piece of Ukrainian and university heritage."