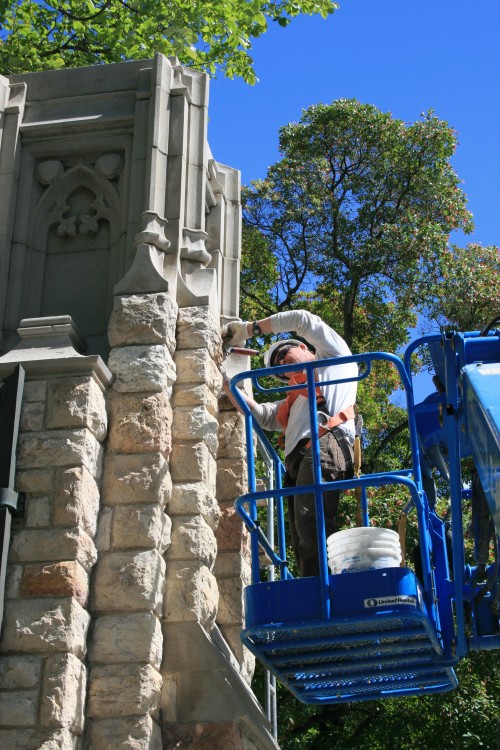 As the name implies, the stone and bronze structure next to St. Andrew's College serves the dual purpose of marking the original entrance to campus and of memorializing the U of S students and faculty who lost their lives in the First World War. But the effects of time and ground heaving and settling left the gates with cracked mortar and shifting stones. The repairs were undertaken after an assessment of the structure revealed the situation was not as dire as originally thought.

Andrew Wallace, associate director of space management and planning with the Facilities Management Division (FMD), said an engineering report done in 2006 recommended the entire structure be underpinned for support, a $400,000 project "that was more than we could fund at the time." Then, a more recent survey was done and compared to the first, revealing the gates were no longer settling.

"If it had kept moving, we would have had to address that," said Wallace, "but in this case, there was no further movement so the repairs are worthwhile."

In July, stone masons from Gracom Masonry, the company that did the stone work on the new Health Sciences building and the Place Riel expansion, worked to replace crumbling mortar on the gates (called repointing), secure loose greystone and clean the Collegiate Gothic structure. Wallace said the cleaning was necessary to ensure the colour of the new mortar matched the old, "not the dirt."

While that work was going on, some very delicate carving was done to add two names to the raised Indiana limestone cenotaph.

When originally constructed, the cenotaph listed 67 fallen soldiers but research done by Professor Emeritus Michael Hayden in the early 2000s revealed that two had been missed: George Israel Peters who was killed in action on June 3, 1917 and Herbert Ernest McRitchie who died of illness on March 2, 1919.

(Hayden's investigation also found 17 names that should have been included in the memorials on the walls of the College Building, now the Peter MacKinnon Building. Wallace said FMD is investigating ways to correct the omission.)

In all, 345 university students, staff, faculty and alumni served their country in the First World War, a number roughly equal to the entire first-year class of 1913. In fact, in 1916-17 the Engineering Department was temporarily closed because all of its students and faculty had enlisted.

The idea of the Memorial Gates was first proposed in 1923 by the Graduate Students' Society which raised about one third of the $30,000 cost of the project. The gates were designed by David R. Brown of Brown and Vallance, the Montreal firm that developed the original plan for the U of S campus in 1909 and designed all of the university's early buildings.

In addition to the names of the fallen, panels on either side of the cenotaph list the battles in which university men took part. There is also an inscription that reads, "These are they who went forth from this University to the Great War and who gave their lives that we might live in freedom."