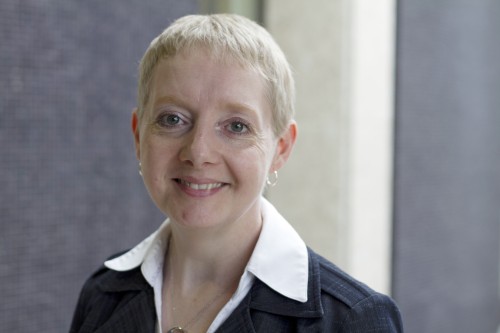 "It has 18 million unique monthly visitors," Barb Phillips said of Pinterest, the third largest social-media site behind Facebook and Twitter. "But no one has really done much research on it."

That was until Phillips, marketing professor and Rawlco Scholar in Advertising at the Edwards of School of Business, decided to find out exactly what people are doing on Pinterest, and why.

She described the site as a virtual bulletin board, a place where users can "pin" pictures from around the web for others to see. "It's the consumption of immateriality. It's like flipping through a women's magazine–we like looking at images whether it's an ad or not," she said.

So Phillips, in her quest for understanding, examined 20 Pinterest boards and close to 2,300 images that had been pinned in four commonly used categories: kitchen, wedding, kids and miscellaneous. What she found was a bit surprising.

"It's described as a social network, but people aren't using it socially and it's not really about creating a community. For one, there are no personal pictures on the boards I looked at, not even in the kids' category."

Another unsocial aspect that Phillips discovered was that users on the site rarely changed or personalized captions on the pictures they pin. "People don't change it for their own preference; they post or repin images with the same captions or comments."

While users may not be socializing or consuming material things on Pinterest, Phillips continued, "they are discovering their personal tastes, like ‘if I get married, I want this type of napkin, or when I redo my kitchen I like these cabinets.' It helps people play with their tastes."

The site is also very future orientated. "It's playing with the future. It's imagining the possible future self – ‘What would it be like to have a baby girl?' It's not the ideal self, but rather based on reality and future possibilities," she explained. "It is always about the future, but not aspirational or (unrealistic) luxury items. The closer people are to purchasing, the more realistic the images are."

The process of collecting all the images "is a lot like treasure hunting. People enjoy looking at pictures they like. It's been called the digital crack for women. They get addicted to looking at images and collecting them for free.

"Just show me pictures I like in a place I can store them for the future. It's different from scrapbooking because that is about making memories tangible. This is about future planning."

Phillips believes she is one of the first to present findings on Pinterest-related research, and her work is attracting a lot of interest because learning how consumers plan for future purchases could mean a big shift in how businesses use Pinterest as a marketing tool.

"Right now, most companies and many marketers are having a tough time with it."