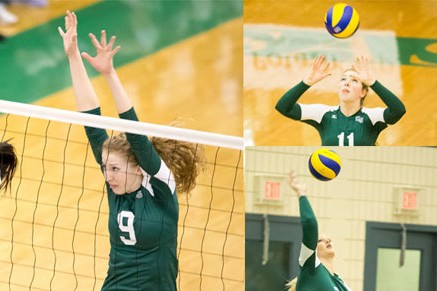 Erin Guillemin, Emily Humbert, Jennifer Hueser, Kassia Felske and Jina Barker were all selected for Team Saskatchewan during try outs May 25 and 26. The team consists of 12 Saskatchewan-born players aged 20 years and under.

Barker recorded 487 assists in her first season with the Huskies. The setter also added 17 service aces, 121 digs and 18 blocks. Felske and Humbert recorded a combined 44 blocks in the middle for the Huskies. Humbert also recorded 21 service aces.

Guillemin, an outside hitter, recorded 22 kills in 14 matches. Hueser will make her debut as a Huskie this fall after being a medical redshirt last season.

The 2013 Canada Summer Games take place August 2-17, with the indoor volleyball competition scheduled for August 3-8 at the Université de Sherbrooke.