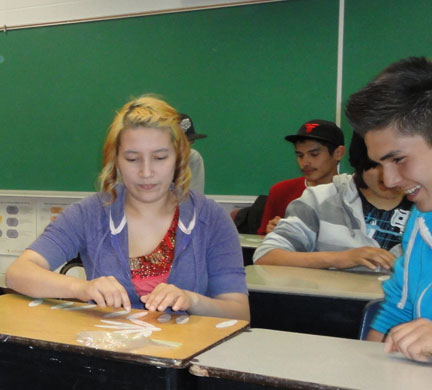 Established at the end of 2012 thanks to $50,000 in funding from the the Pacific Institute for Mathematical Sciences (PIMS), the new initiatives were launched this past January and Math Mania activies were delivered in May. While the past seven months have been largely focused on networking and activity development, educational workshops and activities were first delivered during the FSIN Science Festivals in May.

Personnel from the Department of Mathematics and Statistics were previously involved in delivering math activities in elementary schools as part of various initiatives developed by Lana Elias, the division of science's outreach coordinator in the College of Arts & Science. Math Mania, however, is strictly focused on math and stats skill development and has a teacher mentorship aspect as well, where teachers will be provided specialized lesson plans and access to resources and expertise at the university.

"An important aspect of this program is establishing connections and building relationships with students and teachers in these northern communities," says Stavros Stavrou, outreach coordinator for Math Mania.

"Engaging students in mathematics is difficult in general, and is more challenging in these northern schools that have limited resources."

The majority of efforts so far, said Stavros, have been in the area of Math Mania activity development. He has been busy developing several activities that infuse First Nations, Metis and Inuit perspectives, intended to help students connect with the subject matter.

"These activities usually come in the form of a 60 to 90 minute session in which students explore some topic of mathematics that also has cultural significance," he explained. "For example, we give students an introduction to Cryptography, the art of making and breaking codes, and teach students a few primitive ciphers. We motivate the activity with a discussion about how First Nations tribes (particularly the Navajo tribe) played a key role during WWI as Code Talkers. Students identify with this discussion, and feel more engaged with the activity as a result."

While still in relative infancy, it is hoped the Math Mania program will ultimately inspire studentsâ€”many who otherwise may have not considered a post-secondary education in generalâ€”to continue pursuing their interest in math and statistics at the university level.

We've met many talented students that are interested in pursuing a post- secondary education in the sciences, and we want to ensure that they are prepared for the math requirements of their degree program," said Stavros.

"We hope our collaboration with these (northern) communities will increase mathematical literacy, and show that math is more than tedious pen-and-paper calculations; it is about discovering, describing, and modeling the world around us."