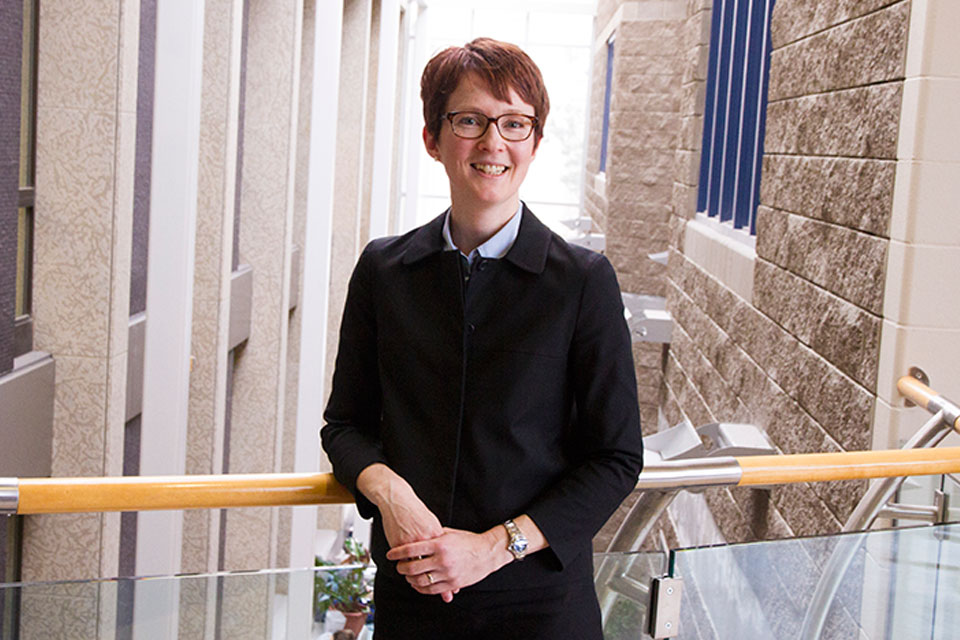 The print ad suggests, with not a great amount of subtlety, that she's suffering from a bad case of heartburn and needs the prescription medicine featured in the advertisement.

This type of pharmaceutical ad, because of how it uses metaphors, piqued Marjorie Delbaere's interest. "I became interested in what was going on in the background meaning in these types of ads, specifically the conceptual metaphors appearing in these ads," explained the associate professor of marketing in the Edwards School of Business. "A couple great examples of conceptual metaphors are that medicine is war or illness is a journey, ‘fight off that cold' or ‘long road to recovery.'"

That's why, she continued, a lot of countries only allow prescription drugs to be advertised to physicians. So Delbaere began looking at how the use of metaphors in prescription drug ads differed between those targeting consumers and those directed at physicians. She and her research assistants began flipping through page after page of consumer magazines and journals for physicians.

What surprised Delbaere was that she found the same types of metaphors in ads directed to physicians as she did for consumers. "I thought advertisers would present physicians with mostly numbers and facts in the ads, but that's not the case. Metaphors were as present in these ads as they were for consumers."

Delbaere doesn't have an explanation for this yet, but thinks "doctors are just like us; they don't have time to read text heavy ads. These ads also provide a way to explain these concepts to patients."

The most common metaphors were those referencing magic, journeys, theft, sports and personifying the drugs. "Metaphors are effective because they make abstract things concrete. The appeal is powerful around complex topics. Drugs are the athlete, magic or weapon and disease is a villain, tormentor or monster. Fibromyalgia, for example, is not well understood, but referring to the pain that results as a thief makes it easier for the average consumer to understand."

Metaphors are persuasive and make the ads effective, but they can also lead to "people drawing conclusions that aren't accurate. The sports metaphors imply that someone is going to win and someone is going to lose. This can lead to false knowledge; sometimes you can't win and will have to live with the illness."

The other startling discovery was that ads "don't often talk about lifestyle changes. That's the dangerous side of it—lifestyle changes are often required and can make a medication more effective. We do have to take some actions ourselves."

These ads have a role, she continued, to help consumers better understand the topic. "If they can make consumers more aware of what it (the drug) does and doesn't do, then there is a better understanding of its limitations. There is no silver bullet."

Delbaere's research is being published in an upcoming issue of the journal Social Science & Medicine . In the upcoming year, her research will move to Germany where there is a "big pharmaceutical industry. We are going to collect information and talk to drug marketers, to get the other side of the story."