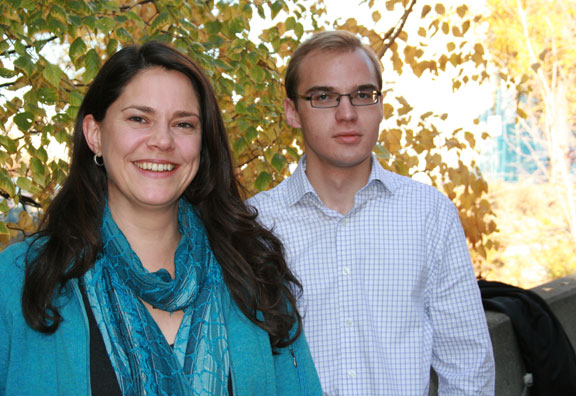 The USURJ (U of S Undergraduate Research Journal) was created by and will be run by undergrads in association with the University Learning Centre (ULC). The biannual faculty-reviewed online journal issued its first call for submissions this fall and is planning its first issue for February 2014.

"We're hoping it will make undergraduate research more visible on campus," said medical student Scott Adams, who shares editor-in-chief duties with graduate student Danielle Bruni-Bossio. "Our aim is to encourage students to take advantage of (research) opportunities, and to create a supportive environment for undergraduate research."

Adams explained that USURJ's genesis came in January 2012, when the undergraduate community first proposed the concept of a dedicated research journal. Funding support from the Office of the Vice-President Research and the ULC allowed the initiative to get off the ground with the hiring of Bruni-Bossio on a graduate student fellowship and building of a website. ULC writing co-ordinator Liv Marken championed the project and Adams joined the team in August.

"We're very lucky to have Scott on board," said Bruni-Bossio, a former professional actor who is currently working on an MFA in writing. "I think it balances us, as I have more of an arts and writing background, and Scott—even though he plays classical piano among other things—brings more of a science background, which is a nice combination."

"We are aiming for a balance among all disciplines," Adams said. "Submissions might include research from a summer project, undergraduate honours theses, something written for a class. It's meant to include original research not published elsewhere."

He explained that USURJ is also meant to give undergraduate students a taste of what research offers, hopefully enticing them to pursue graduate studies and associated career options. While at first students will likely submit work they have already done, Adams hopes they will soon write with publication in USURJ in mind as the journal gains prominence.

"I'm hoping it will make undergraduate research more visible on campus," Adams said. "I hope it encourages more people to take advantage of the research opportunities."

For now, Adams, Bruni-Bossio and about 20 student volunteers will be going through the submissions for the inaugural issue and identifying faculty members to review them. Since the submissions are welcome from all areas of research, the faculty reviewers have to be recruited ad hoc for each issue.

Bruni-Bossio explains that faculty review is an essential part of USURJ, offering students invaluable feedback on their work as well as a taste of the peer-review process that is standard for research journals. She said several faculty members have already expressed interest in participating.

Another task is to create and document the steps to produce each since students working on the journal will change yearly as they move through their studies.

For Adams, USURJ represents a way to not only recognize and honour the work done by undergraduate researchers, but to further the aims of the university itself.

"Undergraduate researchers are our future graduate students, researchers and innovators in their own right," he said. "If we can encourage them now to engage in research, it'll support us in our goal of bringing them into graduate studies and immersing them in the research culture of the university."