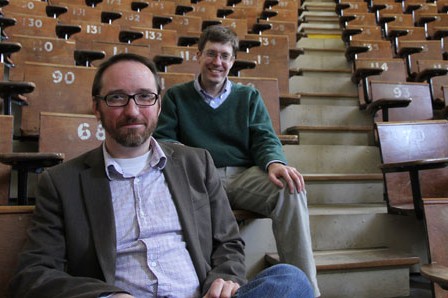 Nathaniel Osgood, associate professor, and Kevin Stanley, assistant professor, both in the Department of Computer Science, have developed a smartphone app that collects important behavioral data that can be used to predict health risks — from causes of obesity and diabetes, to how tuberculosis and flu viruses may spread.

About four years ago when H1N1, or swine flu, first became a health concern in Canada and Saskatchewan, Osgood and Stanley began working together.

"Yeah, Nate was doing it when I first came to the university to do sensor networks and mobile gaming work," said Stanley, whose research integrates GPS technology into gaming to affect and track physical activity levels. "When H1N1 came out, we started thinking about how our research could be used to answer health questions."

The two areas of research fit together perfectly and the two came up with iEpi, a Google Android smartphone app that is capable of collecting personal information including physical activity, geographic location, the number of people an individual comes in contact with and for how long, and much more.

"Smartphones are amazing devices," explained Osgood. "The sensors can track information like where you go for a morning walk, which grocery store or pharmacy you shop at and information on contact patterns. WiFi, Bluetooth, accelerometer and GPS can be used to collect this information through iEpi. It also has a triggered survey component to determine situational context."

That data can then be fed into simulation models that can predict, for example, how a flu like H1N1 would move though a population like the Department of Computer Science—the pilot community Osgood and Stanley tested—or Saskatoon.

"We run groundhog day simulations hundreds of thousands of times based on a set of disease parameters and a set of personal contacts to come up with a probability of someone getting sick," explained Stanley. "We test health policies, like staying at home when sick or getting vaccinations, to test if it makes a difference."

This behavioral information is critical to models, but is not considered because it is historically unreliable and expensive, said Osgood. "Recalling the last five people you saw or your activity levels is unreliable. The lack of hard evidence makes it marginalized (in policy making)."

"That's what's missing – biomedical pathways, the behavioral and social context that's hard to measure," continued Stanley. "We're observing people in the wild and not controlling effects for behaviour. We find that people are inordinately predictable, but not in the same way. Everyone does their own thing over and over again."

That iEpi can capture data on so many aspects of an individual's activity and behavior to predict, for example, how a disease might spread based on location, number of people who come in contact and other factors makes it a unique and valuable technology.

"This is a pretty competitive application. There's nothing like this as far as we are aware. All this data makes the models more reliable and robust," said Osgood.

And iEpi is getting attention from other researchers. Some at Columbia University have used it in a study that tracked individual results of moving from low-income housing to mixed-income housing. They sought to understand results from a previous study showing that young women who made such a move experienced reduced obesity, improved graduation rates and lower crime, whereas young men had slightly higher crime involvement.

"We can use this to figure out why," said Osgood. "Is it because young women got more exercise because it was safer or had access to parks and better food options? Did the young men go back to their old neighbourhoods?"

Closer to home, Osgood and Stanley are working with Drs. Jill Newstead-Angel and Roland Dyck from the College of Medicine on gestational diabetes outcomes in Saskatchewan. "Our modeling suggests that gestational diabetes may be responsible for a large number of diabetes cases in Saskatchewan," Osgood said. "We are looking at how the burden of diabetes is shaped by a number of risk factors with an eye to prevention and control strategies. This is aimed at informing policies and what's most effective; what's the best way to prevent disease."