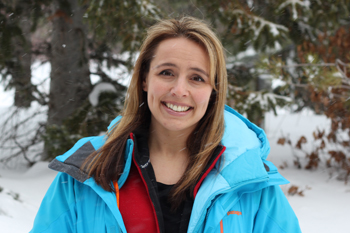 Freedom Climb is part of Operation Mobilization, an international non-profit organization that focuses on helping women and children who are—or are at risk of being—exploited, enslaved, oppressed or trafficked. The organization is involved in rescue efforts, providing shelters, education, training and providing micro-loans.

"A speaker at my church was talking about different humanitarian projects, and I thought it was amazing that some people were doing these things," said Heppner. "I wished it was something I could do."

Heppner realized it was something she could do and joined 43 other women who have committed to trekking to the base camp of Mt. Everest then summit Mt. Kalaphatar, standing 18,192 feet above sea level, to raise both money and awareness to help women and children. "[The climb] itself is symbolic of the struggles and difficulties these women and children are going through every day. It's a symbol of their climb to freedom."

A brief glance at some United Nations statistics (www.ungift.org) confirms there is a lot of work to be done in this area. Up to 21 million people, the majority being women and children, are involved in forced labour generating an estimated $32 billion annually. And don't think developed countries like Canada are immune to the problem. Heppner explained, "I know a woman in Regina whose daughter is being trafficked. The police are involved, and they are trying to get her out, but it's definitely in our own backyard affecting people we know and love."

"I started thinking of my own children and how I would feel," explained Heppner. "I thought, ‘It starts with us.' I thought it was other people that could go out and make a difference. Then I thought I want to be one that makes a difference in this world. It's everyday people that will change the world."

The fact that Heppner is the only Canadian making the trek is additional motivation. "I'm just one small snowflake hoping to start rolling and build into a big snowball. I'm hoping I can represent Canada well and other Canadians will partner with me."

Heppner is also representing the University of Saskatchewan as an alumna and an online course facilitator with the College of Education. "I've been at the U of S for a long time," she said with a healthy laugh. She started following in her mother's footsteps taking psychology, then realized she wanted to teach. Her and her husband, Robert (MEd'09), headed south and taught in the Bahamas for two years, then headed north to teach in a Dillon, Sask. at a reserve school. "That's where I really started getting into special education, and I saw a need for more education on my part. I started off taking some online classes that I'm now teaching."

Teaching online courses for the U of S gives Heppner the flexibility she needs to take care of her young children and train for the climb in April. "I spend time running prairie grids and running the toboggan hill with my weighted pack."

Being from the prairies gives an advantage too—she will be better acclimatized to the cold than her fellow climbers from California, Texas, Africa or Australia. "They're training on mountain ranges and I'm sending pictures of me with my eyelashes frosted after a run." Although, Mt. Blackstrap wouldn't offer the altitude training she will need.

The 17 day trek is fast approaching, and Heppner is "very excited and a little apprehensive." She is looking most forward to "standing on the top and declaring life and freedom for those that can't speak for themselves."

When Heppner comes down from her mountain—quite literally—she doesn't see her involvement ending. "I've really gained quite a passion for these people and learning more. I'm still quite shocked how big of a problem it is. I'd like to help out where I can, and I'm really interested in seeing some of these projects in action."