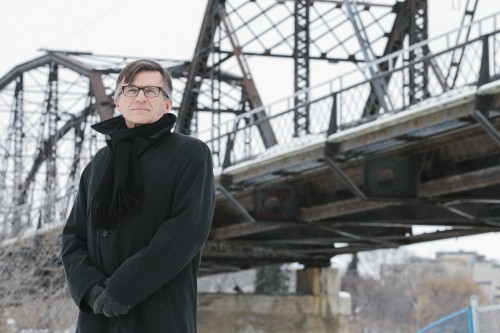 All but forgotten for the next century, a routine diving exercise in 2006 unearthed one of the ship's 200-pound anchors. The discovery triggered a string of efforts, led largely by archaeology alumni and students who have been working tirelessly to bring the ship, and its stories, back to life.

The story of the SS City of Medicine Hat began with Horatio Hamilton Ross. Widely described as a colourful, larger-than-life personality enlivened by fine music, alcohol and cigars, Ross immigrated to Canada from Scotland in the late 1800s.

He quickly built a steamship empire and, in 1906, began construction on a lavish, 140-foot sternwheeler. Christened the City of Medicine Hat, the ship hauled freight during the week. Each Friday night, however, the SS City of Medicine Hat was transformed into a popular party boat, often occupied by upwards of 100 passengers looking to unwind for the weekend.

According to a document compiled by the team charged with investigating the wreck site, Ross set off for Winnipeg in June of 1908. The ship was loaded with cargo and several of Ross's friends, family and crew members. As it approached Saskatoon, dozens of citizens congregated on the Traffic Bridge to witness the fabled vessel's passage through the city.

However, spring run-off that year was high and the river's water levels doomed the ship's journey before it even arrived in Saskatoon.

"The ship had no chance of ever getting under that bridge, no chance at all," said Butch Amundson (BA'83, MA'86), senior archaeologist at Stantec Consulting and the man who led recovery efforts for the ship more than a century later.

As the townspeople watched, and while a farmer was driving cattle across the bridge to Saskatoon's stockyards, the ship struck a pier. As it sank, the ship's engineer jumped overboard and swam to shore while the remaining passengers climbed a ladder onto bridge. Apart from the ship and its material contents, there were no casualties.

Following the wreck, Ross moved forward unperturbed. He purchased several more ships and continued hosting extravagant river parties. An article in Scotland Magazine claims Ross died in 1925 after a rifle he was cleaning accidentally discharged into his stomach.

Digging up the past

Amundson lives for moments like this. He hasn't gone a month without an archeology-related paycheque since he was 19, so delving into Saskatoon's greatest marine disaster has been a definite career highlight.

He was first approached about the project after Saskatoon's Fire and Protection Services found the ship's anchor during a training exercise in 2006. Amundson's research confirmed the anchor had belonged to the City of Medicine Hat and he led conservation efforts for the artifact, which is currently on display at River Landing.

In 2008, a team including Amundson was assembled to actively look for additional remains from the wreck. A film crew documented these efforts, which culminated in a 2010 film, The Last Steamship: The Search for the SS City of Medicine Hat. Despite all the fanfare surrounding this search, not much was found—a brick from the boiler, a marlinspike, and, according to Amundson, "a lot of junk…it was really hard to separate the wheat from the chaff."

Complicating those early search efforts was the fact the wreck site was buried under nearly eight metres of soil and sand. The pier where the ship sunk had been buried when soil was brought in for construction of the riverbank in the 1960s—meaning the actual site of the crash wasn't even in the river anymore.

Then, when it was determined the Traffic Bridge needed to be replaced in 2012, geotechnical engineers were called in. They were required to drill large holes to test the pier's integrity, giving Amundson and his team the resources they required to explore what possibly laid buried far underground.

"In all four holes that were drilled, we found artifacts," said Amundson. "One of the drillers kept hitting a piece of wood and couldn't get through it. At one point, he looked at me and said, ‘You know, Butch, I'm really starting to hate this ship.'"

It was mostly wood that was pulled from those holes—naturally, considering it was a

140-foot ship they were searching for. But other items, such as food tins, cutlery, engine pieces and an old boot were also recovered.

At that point, the archaeologists had to determine if these artifacts came from the ship, or were just random pieces of garbage.

"The strongest evidence supporting the fact these items were from the wreck was that, above them, there was three metres of sand that had no artifacts in them. Above that was five metres of landfill," said Amundson. "So we could reasonably conclude that we had what we were looking for."

In total, about 1,000 individual pieces from the ship were recovered in 2012. Nearly 800 of those were different types of wood—fir and tamarack from ship's the frame, spruce from the hull and decking, and oak from the cabinets.

Two archaeology graduate students from the U of S helped with the project. Erika Cole worked to officially catalogue the artifacts and Yvonne Fortin was actively involved with the day-to-day fieldwork.

Of the seven archaeologists who worked on the City of Medicine Hat excavation, Amundson said six are U of S alumni or grad students.

Ties between the Department of Archaeology & Anthropology and its alumni are strong. Amundson said grads from the department are not only achieving wide-ranging success throughout the world, they also play critical roles in making possible development projects throughout Saskatchewan.

The province's Heritage Property Act stipulates that archaeologists must be consulted for many development projects to ensure items or sites of historical significance aren't compromised.

"Archaeologists are a key link in the chain that allows development and growth in this province to continue," said Amundson.

In his 21 years at Stantec, Amundson said the strength of the U of S archaeology program is continually reinforced—even going so far as to claim the U of S "has the best archaeology school in Canada.

"I've been told we have the most employable grads…and it's obvious to me because we exclusively hire grads from the U of S and it almost always works out," he said.

Cole, who has been working with Stantec for the past two years on a contract basis, hopes to gain full-time employment with the firm after completing her thesis. She said the hands-on experience she has received at Stantec—being involved in everything from cataloguing artifacts to fieldwork—has been invaluable.

Fortin agreed, saying she hasn't taken for granted the chance to work and learn alongside successful alumni like Amundson on this high-profile project.

"It's a once-in-a-lifetime opportunity to find a sunken ship in Saskatchewan. I don't think it's going to happen again so, as students, we're pretty lucky to be working this."

For Amundson, the opportunity to partially excavate a century-old ship within Saskatoon's city limits ranks amongst his most notable projects. There have been others that stick out in his mind, too—the excavation of a 8,000-year-old archaeological site near St. Louis, SK, for example, and the repatriation of Chief One Arrow's remains from Manitoba.

What makes a project memorable, though, has little to do with the site's age or subject matter. It's the ability, afterwards, to tell a story that Amundson said keeps his job fresh and dynamic.

"Older isn't necessarily better. What I like as an archaeologist is the kind of story I can tell and what we are able to learn from the site that we didn't know before," he said.

"That's the business of archaeology. You have fun outside discovering things, and then you have fun when you get back to the lab and put it all back together and get to finally say, ‘Aha!'"