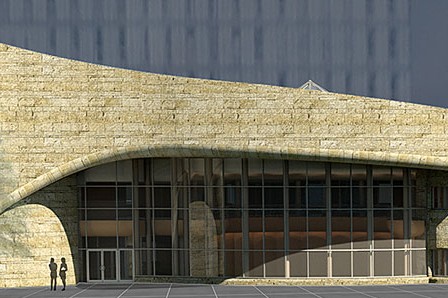 The centre, designed by world-renowned architect Douglas Cardinal, will be a hub for Aboriginal student services, including the Aboriginal Students' Centre and Indigenous Students' Council, with additional space for learning, gathering and ceremonies.

"I look forward to seeing the new centre rise in the core of our campus on Treaty 6 land," said Ilene Busch-Vishniac, U of S president and chair of the project's steering committee. "Over time, I hope this centre will become a symbol of student support, success, learning and cultural understanding—the centre is intended to be so much more than just a building."

The student centre will be located in Wiggins Court between the Arts Building and the Murray Building with connections to both the Arts Tunnel and the Health Sciences Building. The 17 elm trees that will be removed to make room for the centre will be incorporated into the design of the central gathering area inside the building.

The contract for construction of the building is expected to be awarded shortly, according to information provided by the steering committee. The approved project budget is $17 million. More than $12 million of that total has been raised so far with $4.7 million of that total coming from private donors and the rest from internal sources including parking revenue, the Academic Priorities Fund, year-end surpluses from previous years and investment income.

Busch-Vishniac said she is confident that the Gordon Oakes-Red Bear Student Centre will help Aboriginal students feel supported at the U of S as they pursue their educational and personal goals. For many Aboriginal students, the university campus is the biggest community they have been a part of, she added. More than 1,700 U of S students have voluntarily self-declared as Aboriginal.

"The U of S Students' Union has one of the largest numbers of First Nations and Métis members of all student unions in Canada and we take pride in that," said Max FineDay, USSU president who is also a member of the steering committee. "The placement of the centre in the heart of campus is a great first step in showing First Nations and Métis students that they are valued and recognized at our university."