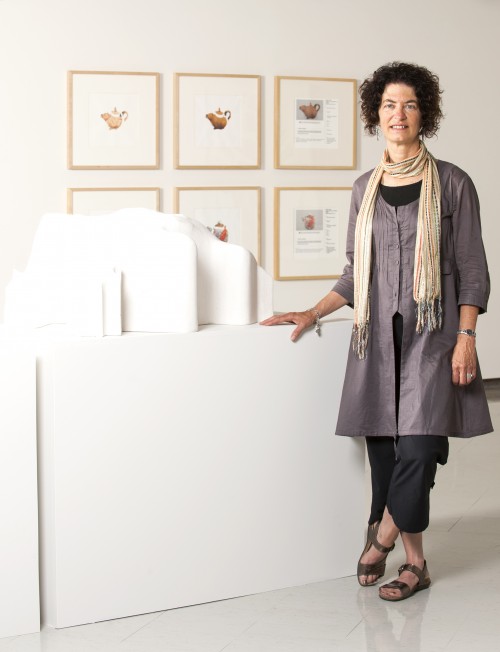 "This project started roughly when I became head of the department," she explained. "It's different than some of my other work in that I worked with assistants. In retrospect, it was the perfect project to do while I was doing administration."

The show of sculptures and prints, which showed at Regina's Dunlop Art Gallery, the Canadian Clay and Glass Gallery in Waterloo, and the U of S Kenderdine Gallery this past summer and is moving on to the Alberta College of Art and Design in Calgary and Medicine Hat's Esplanade Arts Centre, is an exploration of creating twoand three-dimensional forms from simple images. Shantz used modeling software to produce forms based on pictures of four early 20th-century Japanese Banko Ware teapots found on the online archive of the Art Gallery of Greater Victoria.

The idea, she said, came from a November 2006 story in On Campus News about a rapid prototype machine—essentially a 3D printer—in Engineering Shops. "I probably saw the photograph in the story and thought sculptures. They looked really interesting so I went to see them. There was no colour so the form is the dominant thing. It was just the idea that you could take this immaterial digital data and make it material, materializing something invisible in a way. It's almost mystical.

"My goal was to make things to scale working off internet images. Images are so ubiquitous but as a sculptor, they are even less material than a photograph." Shantz wondered if she could create forms using just the "bare bones information" in an image and the dimensions of the original object, but she also recognized there is information missing.

"I was interested in that gap. What does the other side look like? What does the top look like? Are those dimensions accurate? Those interesting elements might be the difference between engineering and what I do." Shantz admitted she is not "digitally savvy" so she hired assistants to help her with the work, people familiar with the software tools needed to create the forms.

"What interested me so much about this project was working with so many people, and there were all these interpretations. That's why I called it translations because people would interpret my stuff. Often in art it's the thing you didn't think you wanted that's interesting. I call it peripheral vision, paying attention to things at the edges. Often they are a creative moment."

By changing the way she worked—spending less time alone in the studio and more time exchanging ideas and files electronically - Shantz was able to find the balance she sought between her art practice and her administrative and teaching duties.

"Usually the art producing slips in around the corners of the other things – the teaching needs attention, the administration needs attention," she said. "When I took on the headship, I thought I would have one day a week to do my art practice, then it was one hour a week, then I thought if I could only get five minutes."

Finding the reflective space —what she called the happy zone—she needs for her art was a real challenge, and a concern, for Shantz during her term as department head, but she took advantage of periods like the February reading week break and summers to attend to her creative work.

"There's physicality involved along with a real focused concentration and I think art making gives you that kind of space. You miss it when you don't have it. Now that I'm finished being head (her term ended in June), I think ‘now I'm going to have time for this.' I have a different perspective on it because administration comes at you all the time. It's not like you can schedule art making for five or 10 minutes or an hour. You need a more sustained time."

Shantz plans to take full advantage of her time without administrative duties. She wants to continue "teasing out" creatures in translation as the show continues on tour, and "I have a few little back-burner ideas so I'm curious about where they will go." One involves creating digital decals that can be fired onto clay.

Even when she is not in the classroom or the studio, Shantz's mind is never far from her art. Holidays and travel often centre around visiting galleries and thinking about her work. "A vacation for me," she said, "is taking a break from email."