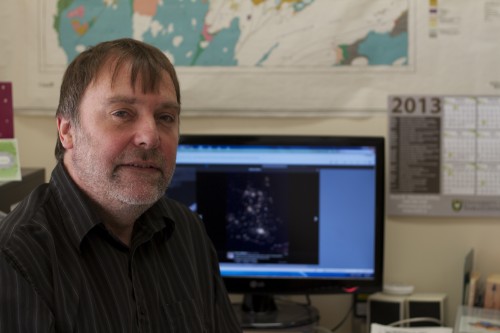 The aerial photo of England at night was taken from the International Space Station and tweeted by Commander Chris Hadfield to his more than 675,000 followers on Twitter. Hadfield's shots have caught the attention of many, including Kevin Ansdell, professor in the Department of Geological Sciences.

"See there, that's London, that's Liverpool and Manchester. Here is Sheffield where I grew up," said Ansdell, pointing to the photo on his computer screen that is geographically identifiable by the concentrations of light.

It was in Sheffield where one of Ansdell's high school teachers first got him hooked on geology as a field of study. And seeing these photos "absolutely reaffirms that I'm in the right field," he said.

"I hadn't paid much attention to Hadfield's photos, but now that I have seen them, they are spectacular shots. Aerial shots at this scale are great at showing geological features on a large scale. I would really like to see images of the Himalayas because it is the biggest and most recent mountain range in the world. An erupting volcano would be neat too."

The shots from space also got Ansdell thinking about how to use the images in class. "The shot at night of England lit up by lights gets me thinking about natural resources and energy production from coal, oil and uranium," he explained. "It emphasizes how much energy is used. Where does London get electricity, where does Toronto get power? The photos would make for good discussion topics in a first-year class."

The images, he continued, really illustrate "the number of cities and all the lights. A few thousand years ago, there was nothing."

Ansdell scrolls through the images, stopping at one of San Francisco. "Look, you can see the fault lines. This would be especially useful in a first-year class talking about earthquakes and faults like the San Andreas. You can trace the fault lines on the photos."

He is also interested in what non-city shots illustrate.

"Every single natural shot without cities shows the shape and margins of coastline and islands, and the complexity of rivers and mountains. They show how Earth has been shaped by natural processes. It shows how the whole planet is being continually affected by nature's geological processes."

From aerial views of geological images from space to a single rock, geologists are always looking for answers as to how the Earth has formed and evolved, Ansdell continued, and the Hadfield photos are a record of present time.

"Present is key to the past, and the past is key to the future. What is going to happen to San Francisco during a major earthquake in the future? What about Seattle and Vancouver if there is a major volcanic eruption? Could we have another Pompei?"

While Ansdell isn't sure what the geological future holds, he is sure of one thing: "I would imagine that people seeing these now have more of an appreciation for Earth. Maybe they might create more interest in geological sciences, but more likely an increased interest in space exploration."