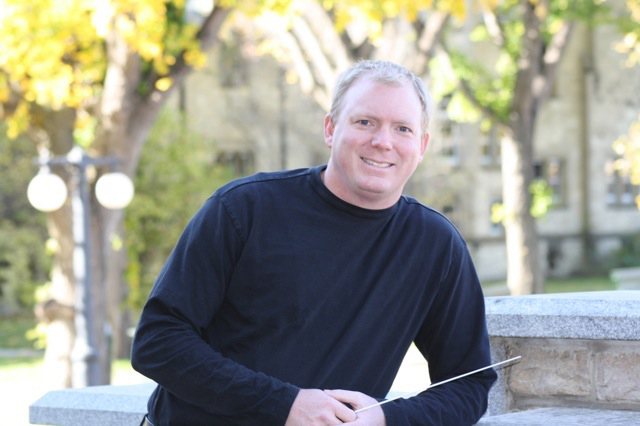 "We want to think outside the campus and spread our influence," said Darrin Oehlerking, assistant professor and director of bands with the Department of Music. "It's great for recruiting and great for letting people know that we as a department and a university are here."

That certainly seems to be the case when observing the rich touring history in the Department of Music. The Greystone Singers and conductor Gerald Langner embarked on a journey to China three years ago, and also try to do at least one local or inter-provincial tour each year. The Wind Orchestra has also previously performed in Austria, the Netherlands and the United States.

International tours like these are also about representing not only the department and the university, but also the country, said Oehlerking.

"We tried to choose repertoire that was distinctly Canadian, so that when we go international, we can bring a cultural element to the places we will visit."

There are many places to spread Canadian music and influence penciled into the itinerary; the tour includes Switzerland, Germany, the Netherlands and Belgium from July 7 to 16.

The idea for the tour initially came from an application to a world conference in Valencia, Spain that was ultimately cancelled. However, due to the strength of the department's application, the company in charge of the conference invited the ensembles to perform instead at the renowned Jungfrau Music Festival in Interlaken, Switzerland and the World Music Festival in Kerkrade, Netherlands. Oehlerking said these festivals are opportunities to showcase music composed specifically for band and choir, and are wonderful opportunities for collaboration.

Collaboration is becoming increasingly important in the department, he said, noting the department's relatively small size eases co-operation amongst ensembles, students and professors.

Colin Elliot, a member of the Greystone Singers and president of the department's student executive, has also observed another important aspect of collaboration.

"With the redefining of the fine arts and humanities right now, I believe that collaboration is extremely important," he said.

Fellow singer Sarah Marshall echoed this sentiment, and is looking forward to reconnecting with a friend who once sang in the choir but now plays French horn in the Wind Orchestra. "It will be really rewarding, and just fun, to play with him again."

The tour, while sure to be a memorable experience for all involved, would not be possible without significant fundraising efforts by tour participants. Both Marshall and Elliot spoke of how the ensembles put together a cookie dough and fruit cake sale, organized Christmas caroling engagements, hosted a talent show, and were behind one of the department's most lucrative Valentine's Day candy-gram campaigns to date.

Though it has been a rush to put things together, Oehlerking is confident that the tour will be very beneficial for the students, especially for those who have yet to travel outside of Canada.

Mara Selanders is an undergraduate student intern in the College of Arts and Science's Communications, Development and Alumni Relations office.