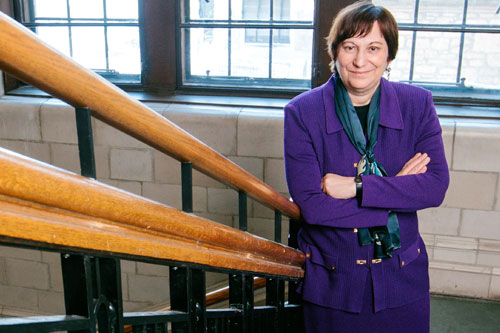 President Ilene Busch-Vishniac will lead a town hall discussion of Vision 2025: From Spirit to Action  Oct. 30 to gather comments on the draft document, part of an extensive consultation process leading ultimately to a version that will guide the university's plans and actions over the coming years. In an interview with On Campus News, Busch-Vishniac said she encourages people reading the draft to ask themselves whether it "effectively honours the traditions of the past as we move forward, does it emphasize the right things from their perspective as we move forward, and if you would be proud to be part of an institution with these values heading in these directions."

Busch-Vishniac first suggested a new vision in her state-of-the-university address in April, and has since prepared and refined a number of drafts after consultation with senior administrators and members of the Board of Governors. The current version, available on her website, is now "locked in," she said, to ensure everyone commenting on the same document.

"Among my aims for this vision was that is should reflect us uniquely," Busch-Vishniac explained. "I want to make sure this vision is relevant for us, that it's not the vision that works for Queen's, or UBC or University of Alberta.

"Equally important to me is that it should not be my vision; it should be the institutional vision. The problem is that I can't promise that we will arrive at something that has nothing that will be offensive to anyone on this campus because to do that would mean that we would produce nothing that had an edge to it or had any real aspirations."

The draft outlines the mission, vision and values of the university, then goes on to detail principles for the future, opportunities to "leave a lasting legacy," the role of the U of S in the province and country, its key partners and what the environment for success looks like. The document speaks clearly about the roles and expecta tions of employees, the make up of the student body, Aboriginal needs, research intensity, interactions with the public, technology, distributed learning, risk management, autonomy and many other imperatives for the institution.

While she attempted to ensure the vision document was balanced in terms of emphasis on any given area, it does include what Busch-Vishniac termed "unambiguous and bold statements. Having said that, the development of this document reflects things I've been saying for the better part of a year so there shouldn't be anything in there that's surprising to anyone."

As for future directions that could be considered contentious, "what better way than to put them on the table so we could thrash them out?"

In early discussions of the vision, the president said she found it interesting senior leaders focused largely on the values outlined in the document rather than its details. "That tells me that what makes us truly unique as a university is the values we have. Those influence how we think about ourselves and the roles we play."

The initial discussions also resulted in the document being pared down from 17 pages to its current seven, "and if my advisors have their way, the finished document will be five pages long."

Asked about her choice of 2025 in the title of the document, Busch-Vishniac said while it is only 12 years away, the objective was to "set goals that were attainable but would stretch us, that would then be used to ensure four-year (integrated) plans would get us there.

"We're well known for doing four-year integrated planning and for actually implementing our plans. This is unheard of at universities. But you need to know where you're headed. My aim was to lift our eyes just a little bit and ask, where will these plans take us 10 to 20 years down the road?"

The draft vision will be shared widely both on and off campus in an effort to gather varied perspectives, and in Busch-Vishniac's many speaking engagements, "this is now what I'm talking about." While the president expects TransformUS "will swamp this consultation process," she anticipates a final version will be ready by spring for endorsement by University Council, Senate and the Board of Governors.

"We anticipate an occasional no vote. We're not looking for unanimous approval but we do want to be in a position where everybody knows their comments have been heard and where there is clarity in the vision and strong support for it."