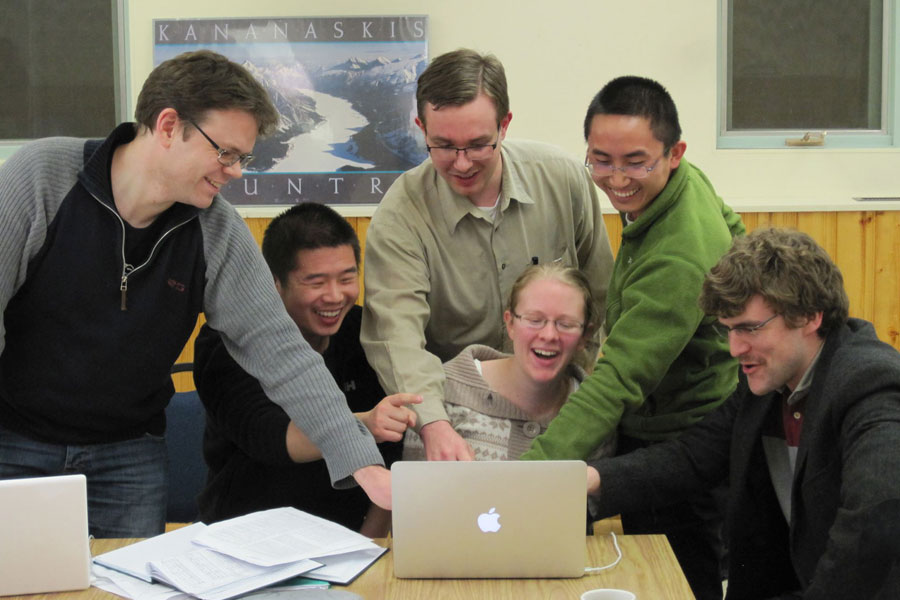 "Seeing the focus and seeing how well everything worked, we (the instructors) were trying to figure out how we could build this into our normal lives and maybe in our own research groups," said McWilliams, an associate professor with the U of S Institute for Space and Atmospheric Studies. "It was really positive."

McWilliams was the U of S lead for the CaNoRock STEP PhD school, held Nov. 4-15 at the University of Calgary's Barrier Lake field station in the mountains west of Calgary. CaNoRock STEP is a Norway-Canada student exchange program in space physics and space electronics that sees Canadian undergraduate students travel annually to Andøya Rocket Range in northern Norway. The Norwegian partners in the program led the November school.

"The concept of the (PhD) course was to take a leading-edge space physics problem, have 10 to 12 very talented and eager young students who have good programming skills and lots of energy to do the data analysis, to do the background reading, and over the course of 10 days, to complete scientific papers for publication—and actually submit them," McWilliams explained.

The students were provided with a sheaf of scientific papers to read before the course to bring them up to speed. The instructors loaded raw data sets from two different satellites and the ground-based SuperDARN network, all of which gather information on the Earth's stormy, electrically charged upper atmosphere.

After a bit of initial instruction, the students were turned loose to do the analysis and come up with some conclusions suitable for Geophysical Research Letters, a leading journal in the field.

It made for some long days, said McWilliams, but the two teams of six students had all their needs, including rooms and meals, taken care of so they could focus solely on their goal. "It was literally just get up, shower, shave, eat some breakfast in about half an hour, then get down to the lab and start working," said PhD student Ashton Reimer. "You were up for about 17 hours. You had one hour for lunch and one hour for supper, so it was about a 15 hour work day."

With no time to waste, the students had to be self-starters and self-organizers, recognizing where their talents might fit in to the team, said McWilliams. For example, while some team members wrote software to analyze data, others delved into background research to fill holes they had identified.

"We didn't have too much of, ‘you do this and you do this,'" said Matt Wessel, one of a handful of master's students at the school. "We were able to figure out what we could do and that worked pretty well."

The teams adopted very different writing strategies as well. While the members of Reimer and Wessel's group wrote blocks of copy to assemble into a whole before a final group edit, PhD student Gareth Perry's team tackled the writing line by line.

"When we finished all the analysis and got ready to write the paper, our group sat around a table with a projector," he said. "We had the text of the paper, and we just started writing by committee, essentially— literally sentence by sentence. I had never done anything like that before. It was painstaking, but it gave us good results. It took about five minutes to get a sentence down."

At the end of the 10 days, both groups had successfully prepared a paper. The teams gathered around a laptop for the final collaboration—to push the "submit" button on the journal's website.

While the journal's reviewers scrutinize their work, McWilliams has another job in mind for the graduates of the CaNoRock STEP PhD school—a pedagogical paper on the school itself as an effective teaching method. "We're going to reverse the process," she said.

"We're going to write the paper with their guidance; that's what we're hoping."