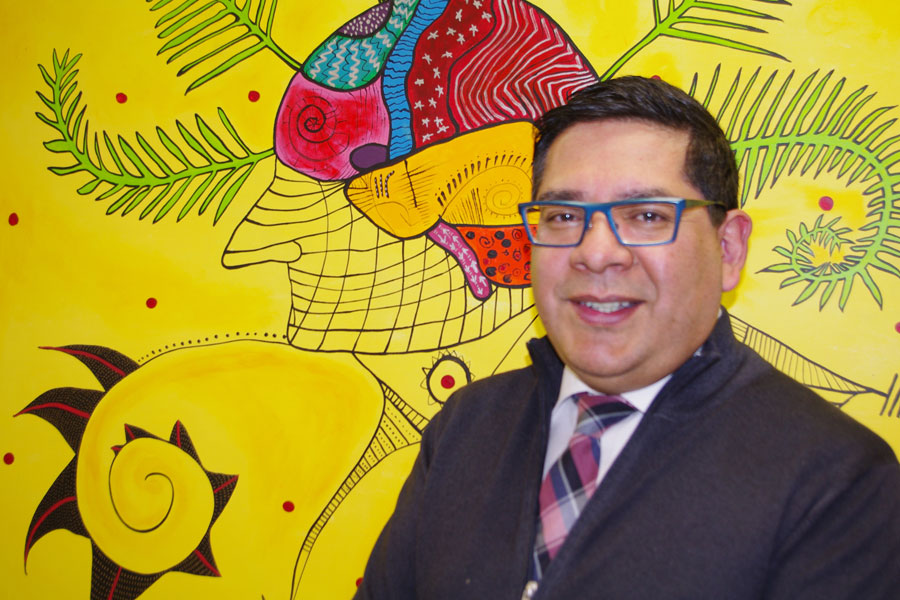 "This oil painting is called The Brain Flower. It was done by one of my patients who had Parkinson's disease," said Mendez, gesturing to a four-foot by six-foot painting.

"He wanted to express what was going on in his brain. It is a picture of something that is beautiful and colourful, but at the same time, there are some disruptions. These parts are shrunk and there's degeneration of cells."

The artwork in the reception area and in Mendez's own office are physical reminders of a new emphasis within the department. The Surgical Human ities Program, launched in the fall, aims to involve surgeons, residents and medical students in art, music, literature and philosophy.

"Having an understanding of philosophy, of expressions of the mind or poetry will sensitize you to see that a person is not only a liver or a lung but this individual is poetry, is music, is philosophy. There is this added dimension that this is not just my patient but a human being who has tremendous potential," said Mendez.

Surgeons, residents, students, surgical nurses and others involved in surgery are being encouraged to re-connect with their creative selves as artists, writers and musicians. Many surgeons give up these interests soon after they begin their medical training because they don't think they have time for them anymore, said Dr. Francis Christian, the director of the Surgical Humanities Program.

"It's a fallacy that doctors have no time for anything else. It's a matter of prioritizing our time. We are very busy. We can, however, find time for these essential pursuits, which make us better doctors and better human beings. Some of the greatest scientists and even surgeons have been great artists as well," said Christian, who has published a novel as well as a collection of poems.

A central component of the program will be a quarterly journal available in print and online that will showcase the talents of surgical team members. The multi-media journal will publish written works as well as digital reproductions of paintings, photographs, sculptures and musical numbers. Submissions for the inaugural issue are still being accepted.

The first event sponsored by the Surgical Humanities Program was a huge success, said Christian. Surgery grand rounds, typically a time when a surgeon explores and presents a specific surgical topic to other surgeons, residents and medical students, departed from tradition in January when Yann Martel, author of Life of Pi  and winner of the Man Booker Prize, joined rounds and read from his book 101 Letters to a Prime Minister.

"It was probably one of the best attended grand rounds. He spoke to us about the importance of story telling and narrative as well as the creative process," said Christian.

It's the creative process involved in sculpting that Mendez said is invaluable to him as a surgeon.

"Doing bronze sculpture has given me the added skills of being able to see objects in three dimensions. When I look at the human brain and I have to remove a brain tumor in the middle of the three-dimensional structure, it allows me to conceptualize that tumor better. Not only that, the skills and the dexterity that I use in sculpture and removing a tumor complement each other," said Mendez.

While medical humanities programs are common at other universities, the University of Saskatchewan is the first in Canada to offer such a program. For Mendez, who arrived at the U of S in June with the vision of incorporating the humanities into the Department of Surgery, it's an opportunity to put his stamp on the department and influence a new generation of surgeons.