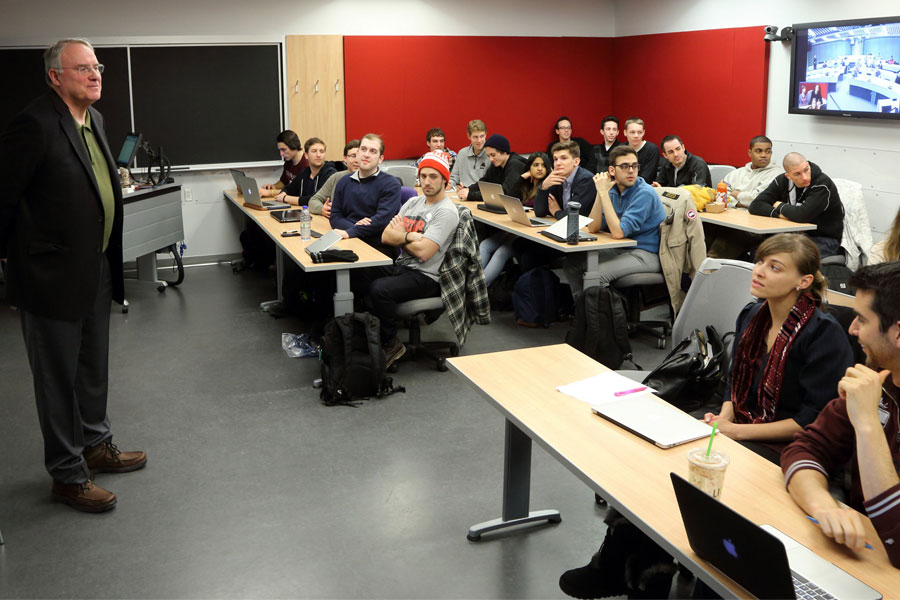 To the next generation, the name might call up an image of a politician, an author or, on six Canadian university campuses, an educator, one curious about— and involved in—how life in Canada can be in the future.

In January 2015, Dryden's multi-presenter course INCC 398.3: Making the Future will be offered for the first time at the University of Saskatchewan, simultaneously and in real time with McGill, Calgary, Ryerson, Bishop's and Memorial Universities. On each campus, students will gather in classrooms outfitted with screens, microphones and cameras to listen interactively to lectures by Canadian experts addressing subjects as wide ranging as the workplace, health and health care, diversity, Canada in the world, religion, public engagement, philosophy and politics.

Dryden will appear in each of the cities during the 13-week program, although not usually at the same time as his presenters, who last year included retired politician Preston Manning, philosopher Ian Gold and law professor Daniel Weinstock. Students will have input into subject matter for two sessions, and each will be partnered with a student on another campus to write papers, coping along the way with time zone differences and wildly varying interests and aptitudes.

"Students (in other courses) mostly learn about the present and the past, and that's comforting—you can talk and write about them as if you know them. But the future, this is something you don't know," Dryden said in a recent telephone conversation. He explained that in his course, students examine different aspects of Canadian life, present and past, before shifting focus to the future. "In our first class, I ask them to write one page to tell me the story of a day in their life 10 years from now.

"Students are optimistic," said Dryden. "Anyone who is 20 (years old) needs to be and naturally is. It's easy to write a cautionary tale, to see everything that's wrong. But the aspirational tale is more interesting and important."

Dryden came up with the program after he lost his seat as a Liberal MP. He began to question the roles of citizenship, government and opposition.

"The things we imagined doing (as a government) were not up to what we as a country are," he said. "None of us really understood Canada … If you have the wrong understanding, you go in the wrong direction or pursue with less ambition than it's in you to deliver."

Dryden pitched the pilot program to McGill University, and after two years there, it grew into a joint McGill-University of Calgary class. In 2015, it will be a six-campus offering, running through the College of Arts and Science at the U of S.

"I tell my students, you have another 60-plus years, working 40-plus years. How do you want to live those years?" Dryden said. "What do you want this Canada and this world to be? I challenge them. I say, ‘Don't just give me a vision—visions are easy. Delivery of a vision—that's hard. Start along the path to how you'd achieve that vision. Your world will change overwhelmingly in your lifetime.'"