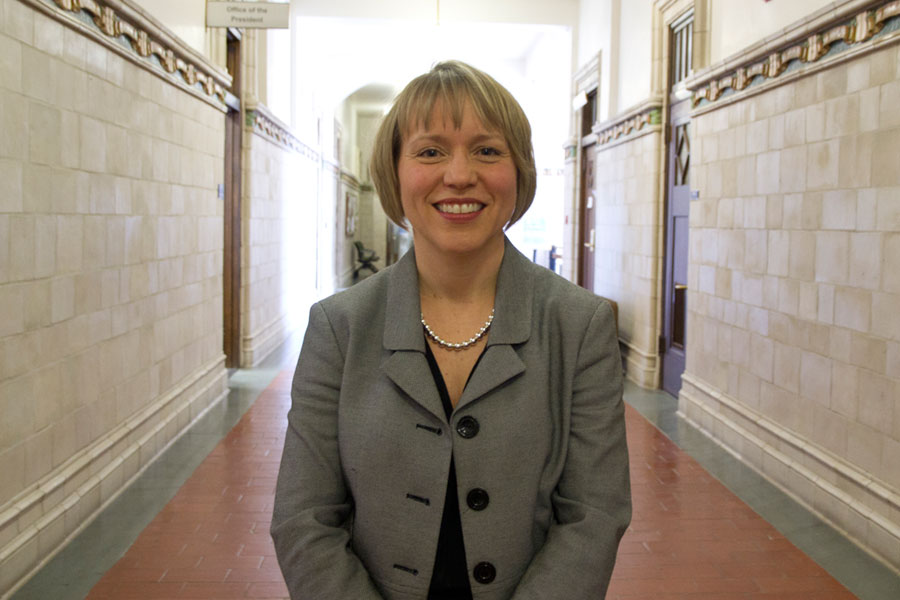 University Secretary Beth Williamson said how the university recruits a president is set out in a document entitled Search and Review Procedures for Senior Administrators . It specifies the membership of the 12-person search committee and the general procedures it must follow. And that committee is already taking shape.

The chair of the Board of Governors will head the search committee, which will include David Dubé and Grant Isaac as additional representatives from the board. Representing University Senate on the committee will be Chancellor Blaine Favel and the student representatives will be Max FineDay, president of the U of S Students' Union, and his counterpart from the Graduate Students' Association, Izabela Vlahu.

Yet to be selected are two representatives from the ranks of deans and executive directors, and the four committee members from the General Academic Assembly, who will be named by University Council at its October meeting, said Williamson.

"In terms of timelines, the Governance and Executive Committee of the board is working on identifying a search consultant to assist in the process," she said. A request for proposals for a search firm has been issued and the university secretary expects a contract will be awarded in September.

Once the committee is confirmed by the end of October, it will review the position profile and begin a consultation process. Williamson said the search procedures require that the university community and various stakeholders be given an opportunity to comment on "the university's strategic goals and objectives, and on progress made or problems encountered in achieving those goals and objectives."

At the end of the consultations, the information received will be used by the search committee to inform the position profile, she said.

Working with the search firm, the committee will then proceed to a selection process, including deciding if the search will be open, meaning the names of candidates are public, or closed with the identity of candidates kept confidential.

Williamson said that while the decision is the committee's, there is guidance in the search and review procedures for a closed presidential search because an open search may result in fewer candidates coming forward for fear their current employer will then know they are seeking employment elsewhere. Williamson said the committee will take as much time as is necessary to find the appropriate candidate for the job of president.

She added that the search for a provost and vice-president academic is also being discussed "but there is a desire to allow the next president to have input into the selection of the new provost." Ernie Barber has committed to remain in the position on an interim basis until a new provost is identified, she said. Interim President Gordon Barnhart has made the same commitment "but there is an understanding that we'll keep the ball rolling."

Williamson said the presidential selection committee will be providing updates throughout the process "that address two questions: ‘Are you making progress?' and ‘Is there anything you can tell us?'"

Acting in the past

On a number of occasions throughout the history of the U of S and for a variety of reasons, the chief administrator of the institution has served in a temporary capacity, most often with the title of acting president and, most recently, with an interim designation.

According to records from University Archives, Walter Murray, who served as the first president from 1908-1937, took a year of leave in 1919-1920. Stepping into the role was George H. Ling, who at the time was dean of arts and science.

James S. Thomson also took a year of leave during his term as president in order to serve as general manager of the Canadian Broadcasting Corporation. Walter P. Thompson, another dean of arts and science, served from 1942-43 in an acting capacity and went on to become the third president in 1949.

The next acting president, Robert W. Begg, held the office in 1974-1975 upon the retirement of John W.T. Spinks. Begg officially assumed the office as fifth U of S president in 1975 and served until 1980.

When Leo F. Kristjanson retired as the sixth president in mid-1989 for health reasons, Blaine A. Holmlund, who was vice-president of planning and development, served as acting president for five months until J.W. George Ivany began his 10-year term as the seventh president in November 1989.

The current interim president, Gordon Barnhart, took up the position May 22 after Ilene Busch-Vishniac, the University of Saskatchewan's ninth president, was dismissed without cause.