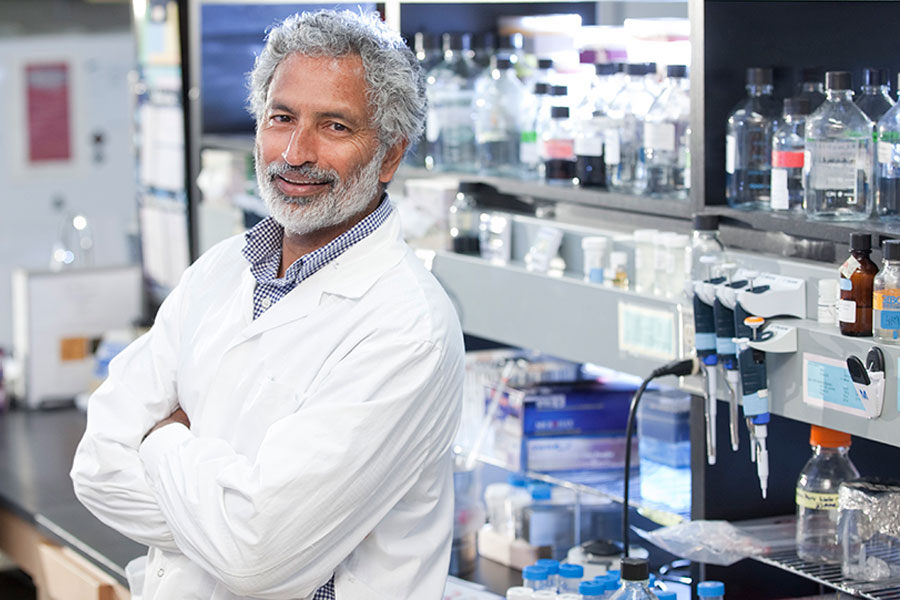 Misra, a professor of veterinary microbiology at the Western College of Veterinary Medicine (WCVM), expounded on the virtues, vices and astonishing variety of bats to a rapt audience of about 30. "There are bats that would fit on my thumbnail, and bats in India with a six-foot wingspan," he said.

Misra explained that bats are the only mammals that evolved true flight, pantomiming with outstretched arms how their taxonomic order got its name. If a human had fingers like a bat, they would stretch to the floor from shoulder height, and be joined with thin webs of skin. Hence, bats are Chiroptera, he said, from the Greek words for hand and wing.

Chiropterans account for roughly 1,000 of the more than 5,000 species of mammal on the planet. They fill ecological niches virtually everywhere except Antarctica and the high Arctic, performing such valuable services as pollinating fruit plants and eating tons of insects.

Misra shared the story of what is billed as the world's largest urban bat colony under the Congress Avenue Bridge in Austin, Texas. Tourists come to watch up to 1.5 million Mexican free-tailed bats swarm to and from their roost every dawn and dusk, searching for insects including a moth whose caterpillars are a major crop pest.

"The bats are so numerous that they can be seen on radar," Misra said. "You can see the cloud of bats and the cloud of moths as they move together. Then they meet, and there is only one cloud—the moths are gone." On the Prairies, Misra said there are six species of bat, three of which migrate south for the winter, and three that hibernate. The little brown bat, which can be seen flitting about in Saskatoon on warm summer evenings chasing mosquitoes, is a hibernator with a remarkable ability for torpor, putting itself into suspended animation for the winter.

Unfortunately, the little brown bat, as well as other North American bats, are under threat by white nose syndrome. The devastating disease has killed millions of the animals—by some estimates, 94-99 per cent of affected colonies throughout Eastern Canada and the eastern United States. Researchers at the WCVM discovered in 2012 that the bats are likely dying from a fungus recently introduced from Europe, possibly from people visiting caves there and inadvertently bringing back fungal spores.

While human activity can be harmful to bats, the reverse is also true, as Misra explained with several dramatic examples. In 2008, a Dutch woman became sick after visiting Python Cave in Uganda, a tourist attraction that features huge snakes on the floor. Misra explains there is a reason for the pythons' size—a plentiful food supply right overhead.

"If those tourists put their flashlights up, about a foot above their heads, they would see the roof is covered with bats."

The woman had contracted Marburg virus from the bats. The virulent and deadly hemorrhagic fever ultimately killed her and caused the government of Uganda to close Python Cave.

Other examples include Hendra virus, which flares up in Australia and kills horses and sometimes their keepers, although it does not harm the bats that are its host. Likewise, bats harbouring the Nipah virus in Malaysia suffered no ill effects from it, but they ate fruit in orchards near pig farms and the pigs were exposed to the virus. People caught the virus from the pigs and died, prompting the government to cull the country's entire pig herd—about a million animals—to contain the disease. Misra said the scenario in the disaster movie Contagion  was based on the Nipah case.

Closer to home, Misra said SARS also had a bat connection, borne of markets in Asia dealing with live exotic meats. Civet cats picked up the virus from bats, and then infected the people who ate the cats. Modern air travel brought the disease to Canada.

Despite their mixed reputation, Misra recommended a measured approach to humans' relationship with bats. Even the vampire bat, native to Mexico, Central and South America, has its saving graces, although perhaps not its feeding habits. It scuttles along the ground at night and creeps up to cattle (or an occasional sleeping human), makes a small cut with its razor-sharp incisors, and laps up the blood.

Despite their creepy habits, Misra said vampire bats may have great value to human health thanks to a powerful anticoagulant in their saliva.

"This substance promises to be a much more effective treatment for people suffering from stroke," he said.Cafés Scientifiques like the one that featured Misra are informal events that bring scientists out into the community for conversations with the public. The movement has roots in the United Kingdom, explained Julia Boughner, an assistant professor from the College of Medicine, who, along with PhD student Isaac Pratt, organizes the monthly events for the U of S.