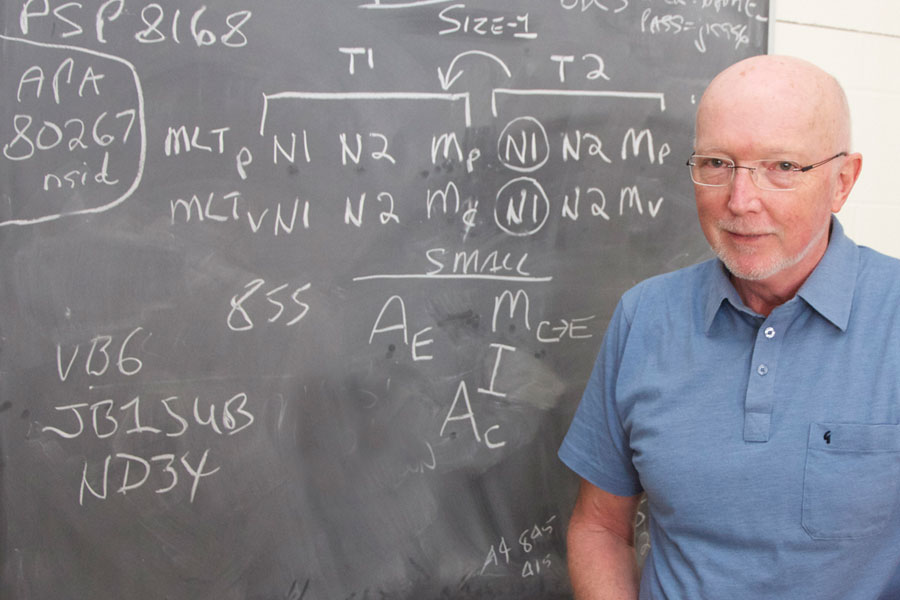 "The reason there has not been a simple solution to this is that the process of learning arithmetic is extremely complicated."

Campbell, a cognitive psychologist, has spent his entire academic career researching how the brain learns arithmetic, how it retains that information and how it retrieves math facts.

One of his latest studies involves retrieval-induced forgetting, something that every person experiences many times throughout the day. In the process of retrieving or remembering something from long-term memory, other information is suppressed or forgotten.

"You couldn't possibly retain everything you learn. Forgetting is a healthy part of memory," he said.

Understanding retrieval- induced forgetting is key to improving math education and could be valuable in designing curricula.

"Memory competition is a major source of difficulty in learning basic math facts. I don't think that has been recognized," said Campbell.

"When kids first learn multiplication, it clobbers their addition skills. There's some evidence that it never actually recovers. There's always an asymmetry there where multiplication interferes with addition."

He suggests changing the order of the math skills learned to ensure students are competent in one before another is introduced.

Campbell also studies the differences in math competency between U of S students who attended Canadian schools and those who were educated in China.

When participants are given two minutes to complete as many problems as they can using pencil and paper, the Chinese students complete significantly more than the Canadian students.

"When you get those tests back, you know immediately which group it came from. That's because in the Canadian group, there is all kinds of marginal writing. The carrying operations and the intermediate steps are written on the page. They are using the page as a working memory," he explained.

"You look at the Chinese test papers. There is none. There are only answers. That clearly shows they're using working memory more efficiently than Canadians are."

Why this is the case isn't clear. Differences in language, teaching methods and parental expectations likely have some influence. So could calculator use; while Canadian students begin using calculators early in math education, Chinese students often do not have access to calculators until university.

The debate over how best to teach mathematics has been going on for the past century.

"I've seen the flip flop between drill the facts and don't drill the facts but emphasize some kind of concrete understanding of the operations. Both of those facets are important."

While educators work to strike a balance between the two, there has not been an interest in incorporating what Campbell and other psychologists have learned about how the brain and its memory process arithmetic.

"My experience is that there seems to be a barrier. It's sort of different philosophies. There isn't as much cross-talk as we would like," said Campbell.

It's a divide that Campbell would love to see closed in the interests of improving math education in Canada.