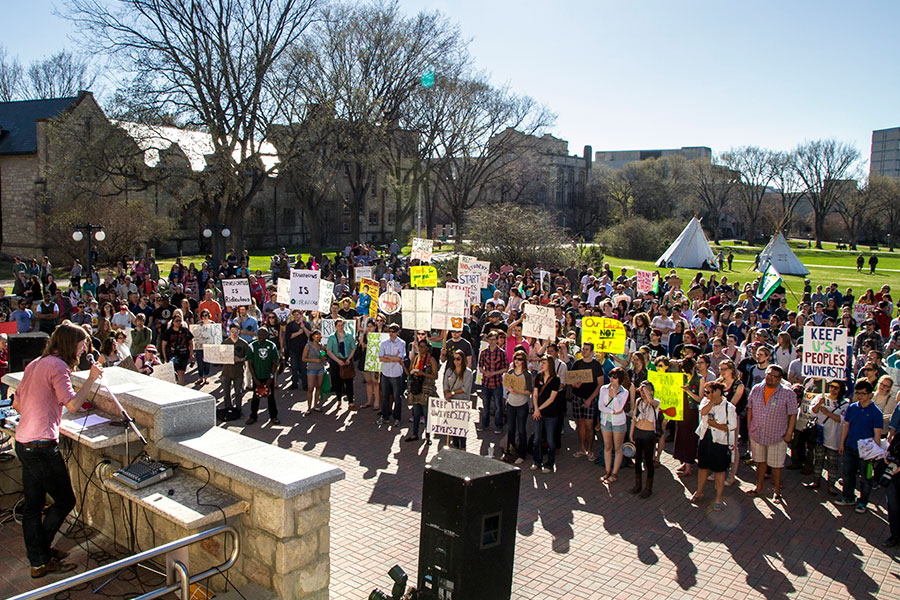 Students, faculty, staff, alumni and other members of the public have raised concerns— through letters, emails and phone calls, and on social media sites— about tenure and the role of academic freedom at the U of S. Others have questioned the university's leadership, vision and values. Though the university has received some pointed criticism, the outpouring of concern demonstrates how important the university is to the community, said U of S President Ilene Busch-Vishniac.

"It has been a very difficult time for the entire university community. We acknowledge the concern at home in Saskatoon, throughout the province of Saskatchewan and across the country," she said.

"It is unfortunate that these recent issues have overshadowed the excellent work that is undertaken every day by our faculty, students and staff. Their ongoing dedication is paramount to the continued success of the university," explained Busch-Vishniac.

"I want to again reiterate that academic freedom and tenure are sacrosanct at the University of Saskatchewan. We have a culture of respecting diverse opinions and encouraging vigorous debate."

Buckingham, who provided a document to the media that he entitled "The Silence of the Deans", was terminated on May 14 from his executive director position for acting contrary to the expectations of his leadership role. On May 15, the decision to revoke Buckingham's tenure was reversed and his tenured position with the School of Public Health was reinstated.

Busch-Vishniac said Buckingham's tenured position should not have been put in jeopardy. "Frankly, we blundered. I am sincerely sorry for that. We quickly recognized that we made a mistake, and we then took immediate steps to correct it," the president said.

"I want to again publicly apologize to Dr. Buckingham. I want to again emphasize that our university has been, is and always will be committed to providing a positive and safe campus while maintaining our academic values of open, unencumbered discussion."

Buckingham's letter of dismissal was signed by Brett Fairbairn, as provost and vice-president academic, who resigned from his position on May 19. Fairbairn, a tenured history professor and Rhodes Scholar, had served in that administrative role since 2008.

In his letter of resignation, Fairbairn stated that he was resigning due to his "genuine interest in the well-being of the University of Saskatchewan. I believe the work I have done as a student, faculty member and provost has contributed to the growth of our university's reputation. The same interests lead me to offer stepping aside from the provost role as the best contribution I can now offer under present circumstances."

Busch-Vishniac accepted Fairbairn's resignation and thanked him for his years of dedication and service to the university. "I have a great deal of respect and admiration for Brett. It has been difficult to absorb, but I do appreciate and respect his reasons for taking this course of action," said Busch-Vishniac, adding that an interim provost has not yet been appointed.

Fairbairn's resignation occurred before an emergency meeting of the university's Board of Governors, who met for hours late into the evening on the Victoria Day holiday. During the meeting, the board had "a thorough discussion of the issues" taking place at the university, said board chair Susan Milburn, who also acknowledged the outpouring of public concern and the many letters received by the board.

In a statement issued to the university community and to members of the media, Milburn emphasized that the board is committed to doing its due diligence before a decision is rendered on university leadership.

"We do not want to act in haste and, therefore, we have not made any final decisions, other than to maintain our strong commitment to financial sustainability and renewal," explained Milburn.

Advanced Education Minister Rob Norris attended part of the May 19 meeting of the Board of Governors. Upon leaving, Norris, who spoke with several reporters waiting in Convocation Hall, said the dialogue was "very respectful" at the meeting, and he respects the autonomy of the University of Saskatchewan and the board. Norris said he does not want to "prejudge what the board will do" with the questions that he raised during the meeting.

"These are individuals that are working diligently to serve the best interests of the University of Saskatchewan," he said.

However, Norris said there is a "crisis" occurring in terms of the university's national and international reputation. Reporters also asked the minister about concerns surrounding a potential violation of the University of Saskatchewan Act.

"There's a section of the Act that senior administration needs to report issues of faculty issues— significant faculty issues—and so there are real questions about the substance of that kind of report process, especially given, and in light of, the reversal that took place, and some of the commentary around that reversal," he said.

After the meeting, Milburn also spoke to reporters and said that the board believes it is in compliance with the University of Saskatchewan Act. When asked about university leadership, Milburn said no final decisions have been made.

"We need to ensure that we have the appropriate level of information to make a decision. We don't want to make any hasty decisions. We want them to be deliberate and well thought through," she said.

Further discussion will occur at the next Board of Governors meeting scheduled for May 26-27. Milburn told reporters much needs to be done to restore the University of Saskatchewan's reputation.

"We've got a lot of work to do to restore the reputation of the university. That is everyone's responsibility. It's the board's responsibilities, senior management and every person that works here. So we have a lot of work to do there, and one single meeting, one single decision, isn't going to fix that," she said. "We have a real desire to introduce a renewal to this university. We really want to focus on financial sustainability. We want to focus on all of the really good things that happen on this campus. So we have a lot of work ahead of us, and the board considers themselves to be a part of that work."

There have been public calls for Busch-Vishniac to resign as president of the University of Saskatchewan, including during a rally held in the Bowl on May 20. However, Busch-Vishniac said she has no plans to tender her resignation.

"I am committed to this university. There is still much work to be done. The board has been very clear that the university must remain focused on ensuring the university is financially sustainable. I continue to be very excited about the opportunities and the challenges of this job," she said.

"I believe people are passionate about this university and that is a good thing. I am listening. I am committed to doing what needs to be done to understand the issues that are being raised, and the best place for me to do that is from my role as the president."