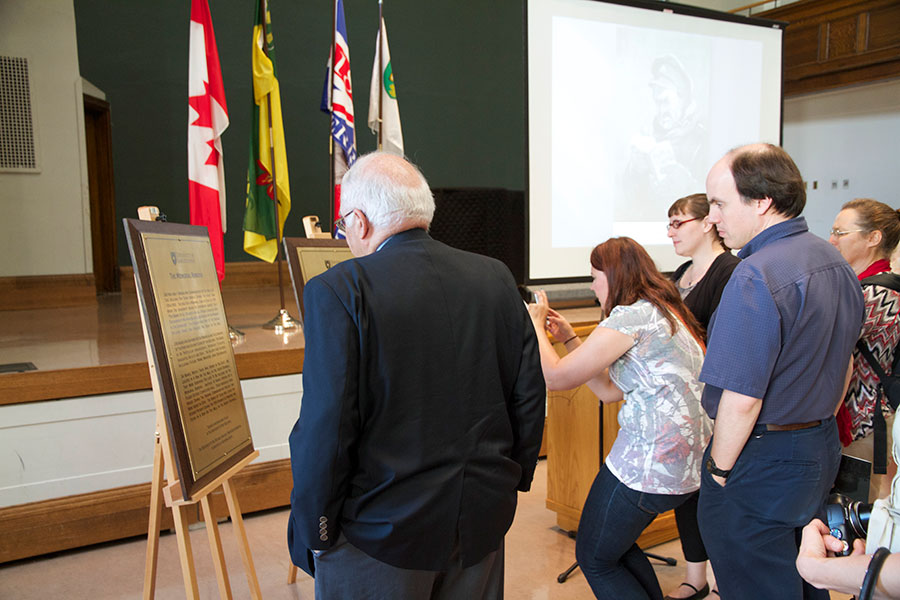 Speaking to a small crowd at the unveiling in Convocation Hall, Gordon Barnhart, interim president of the U of S, said the young men and women – students, faculty, staff and alumni – "made great sacrifices on our behalf." The tribute paid to them within the building "remind us these people should not be forgotten."

The Great War Commemoration, entitled rememberUS, will continue for the next four years with a number of events, including a public lecture in October by award-winning author Joseph Boyden. In 1918, the project will wrap up with a rededication of the university's Memorial Gates.

Barnhart said that when Canada joined the First World War in August of 1914, the University of Saskatchewan was only seven years old, had graduated just three classes and had awarded fewer than 50 earned degrees. In that year, about 75 per cent of the student body enlisted to serve, and by 1916, the College of Engineering shut down for lack of teachers and students.

He added that research revealed that enlisted faculty and staff were given half pay while they served and their positions were held for their return. Students received credit for one year of studies for serving, but at that time, the war was only supposed to last until Christmas of 1914. Instead, it continued until November of 1918.

"The First World War, the Great War, the War to End All Wars, whatever you call this conflict lasting from Aug. 4, 1914 to Nov. 11, 1918 had a profound effect on our province, this city and this very campus," noted Vera Pezer, chancellor emerita, who also spoke at the ceremony. "If you lived here then you likely had a family member or friend who served in the war."