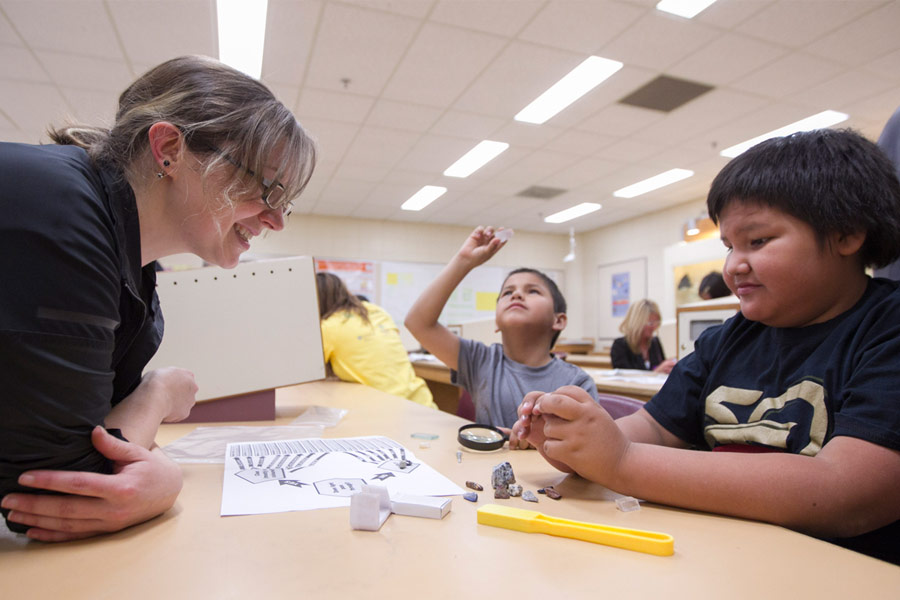 The PotashCorp Kamskénow program, run out of the College of Arts and Science at the University of Saskatchewan, has been selected for two 2014 Global Best Awards from the International Business Education Partnership Network.

PotashCorp Kamskénow is a science outreach program that provides hands-on learning in Saskatoon classrooms based on each of the Division of Science disciplines at the U of S: biology, chemistry, computer science, geological sciences, mathematics and physics. Rather than a one-time school visit, the program offers students 12 weeks of classroom activities culminating in a trip to on-campus labs in week 13. All sessions are led by U of S graduate and undergraduate students.

The Global Best Awards—affiliated with the Conference Board of Canada—celebrate partnerships between educational institutions, private businesses and other stakeholders. As an innovative collaboration between the College of Arts and Science, Greater Saskatoon Catholic Schools, Saskatoon Public Schools and title sponsor PotashCorp, the PotashCorp Kamskénow program was chosen this spring as joint winner of the 2014 Science, Technology, Engineering and Math (STEM) Award for the North America region.

At the award ceremony in Brussels, Belgium on Sept. 12, PotashCorp Kamskénow was announced as the joint winner of a second Global Best award: best overall in the STEM category.

"We are thrilled with this recognition and validation," said Lana Elias, director of science outreach programs for the U of S Division of Science. "It's an honour to share our enthusiasm for learning and to empower Aboriginal students to succeed in the fields of science and mathematics."

Recognizing that Aboriginal peoples' participation in the sciences is disproportionately low, PotashCorp Kamskénow's organizers aim to pique students' interest in these subjects early in their lives. The program is offered to Grade 4-12 classes in Saskatoon schools with a high proportion of Aboriginal students.

With the support of its partners and sponsors, the program has grown from one pilot classroom in 2009 to 43 classrooms and 861 students in 2013.

"PotashCorp is proud to partner with the U of S on the Kamskénow program," said Lee Knafelc, vice-president, human resources and administration at PotashCorp. "With the program's goal to excite youth about science, we are hopeful these Aboriginal students will pursue science careers. PotashCorp thanks the dedicated student educators for making the Kamskénow program so engaging, and we are thrilled that the program is being recognized for its positive impact on our community."

Shelly Lord, principal of St. Michael Community School, participated in some of the recent sessions of PotashCorp Kamskénow held at her school.

"I know the students got more excited about science—it opened up a new world for them," Lord said. "What I loved about it was that it was hands-on. The kids were engaged and part of the learning instead of being talked at."

Additional funding for PotashCorp Kamskénow comes from NSERC, the Community Initiatives Fund, the College of Arts & Science and U of S Community Engagement and Outreach.

Program partners and participants celebrated their achievements at a recognition event at the U of S on Oct. 3.