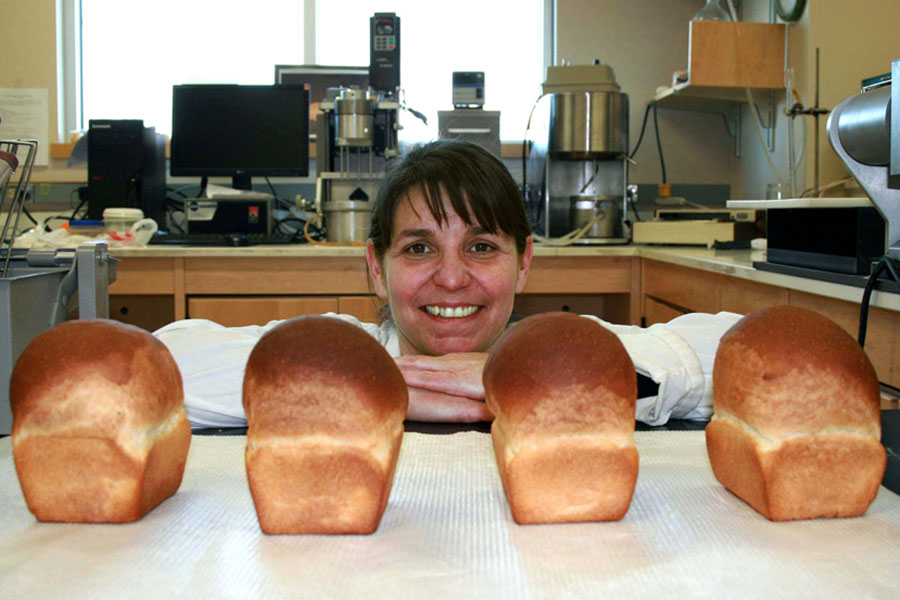 Briggs continues on the subject of wheat and the importance of gluten as she shows a visitor around the labs. She bristles at the bad rap gluten has received in the media. Health Canada estimates about one in 100 Canadians with celiac disease cannot digest gluten and some American sources estimate about six per cent of people live with non-celiac gluten sensitivities. But for the majority of people, Briggs said gluten is perfectly fine.

"I might be a little passionate on the gluten thing."

Gluten is found in wheat, barley, rye and related grains. It allows dough to expand by trapping gases produced by the yeast, producing bread of high volume with soft, springy texture, she explained, and it is just one of the things Briggs and her colleagues test for the university's wheat and durum breeders.

In the lab, wheat samples are ground to meal and milled to flour to produce data on everything from mineral and protein content to final product performance. New wheat varieties must perform as well or better than registered varieties in a wide range of tests before they can be considered for registration with the Canadian Food Inspection Agency.

The "breeder lines" produced by U of S scientists and tested in the lab number in the thousands. Briggs said in the winter of 2013-2014, the lab evaluated more than 13,000 samples from three classes of wheat.

On one lab bench, a steel wheel turns behind a clear plastic shield, its single notch picking up one grain of wheat at a time, feeding it to a piston that crushes it. A technician carefully notes the numbers that appear on a display, a measurement of the hardness of the grain.

"Hardness is an important factor for milling and baking," Briggs explained. "If the wheat grain is too hard, some of the starch granules can rupture during milling. Flour with a lot of damaged starch tends to absorb more water. In bread dough mixing and baking, the damaged starch cannot retain the water, and the dough becomes sticky and the bread gummy—not good when it comes to baking quality."

Flour is also tested for gluten. Technician Vinh Tang works with small, sticky balls of gluten produced by washing starch out of flour dough, testing them for elasticity and strength. Not all gluten is the same; depending on its characteristics, it may be better suited for use in making bread, cookies and cakes, or flatbreads, pastas and noodles.

Canadian red spring wheat yields a near-perfect curve on the graph, showing good strength and mixing tolerance, not surprising, as this type of wheat is well known around the world for its quality. An extra strong variety of wheat is true to its name; the curve does not fall off at all.

"Its gluten is way too strong," Briggs said. "The bread won't be able to rise properly and loaf volume will be low."

Briggs herself runs the baking test section, which includes lab-scale dough-mixing equipment that produces one small piece of dough at a time for baking. The final test loaf is about half the size of a storebought version.

"When mixing the dough, I can tell when the dough is at peak development because it snaps like gum; you can hear it." Briggs said.

Every step in the testing must be consistent, since handling the dough changes its characteristics. Briggs kneads each ball of dough seven times before putting it into the fermentation cabinet, a warm compartment beside the oven where the dough is allowed to proof or ferment. After a short time, the dough is formed into a loaf using special small-size equipment, proofed again and finally baked.

Depending on the number of samples being tested, the process can keep Briggs on her feet working and recording data non-stop from 9 am to 5 pm, an ordeal that is not kind to her feet. Baking day is, however, popular with her colleagues.

"At the end of a bake day, I slice up a bunch of bread and wheel it out into the hall with some margarine, peanut butter and jam. People come from all over the building for their afternoon snack."